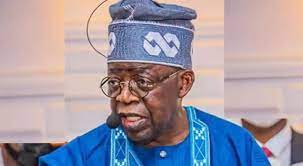 Asiwaju Bola Tinubu, presidential candidate of The All Progressives Congress (APC) has referred to the 2023 elections as a battle for Nigeria’s very soul.
At the start of his campaign on Tuesday in Plateau State’s Jos Township Stadium, Tinubu made this statement.
A huge crowd attended the campaign, which was attended by President Muhammadu Buhari and important members of the ruling party.
Vice Presidential Candidate Senator Kashim Shettima, Senate President Ahmed Lawan, and Speaker of the House of Representatives Femi Gbajabiamila all attended the flag-raising ceremony.
Governors Atiku Bagudu (Kebbi), Abdullahi Sule (Nasarawa), Prof. Ben Ayade (Crossrivers), Abdulrahman Abdulrasaq (Kwara), Abdullahi Ganduje (Kano), Nasir El-Rufai (Kaduna), Abubakar Sani-Bello (Niger), Yahaya Bello (Kogi), Abubakar Badaru
Also speaking at the rally were Dr. Ibijoke Sanwo-Olu, the wife of the governor of Lagos, Senator Oluremi Tinubu, the wife of the APC presidential candidate, Hajiya Nana Shettima, the wife of the APC vice presidential candidate, Shettima, as well as ministers and members of the APC National Working Committee.
In a speech later translated into Hausa by his running mate, Tinubu thanked Nigerians for having faith in the APC to govern the nation.
He claimed that Plateau, which effectively displays Nigeria’s vast potentials, would be the starting point of the campaign.
Reeling out the successes of the Buhari administration, Tinubu said there was massive development in the agricultural, infrastructure and power sectors in the last eight years of the APC government.
You can read more of such stories at The Cheer News
Obi To Soludo: It&#8217;s Your Turn To Deliver As A Professor, I Governed Anambra As A Trader
‘Why FG Is Driving Tech Dev’t With Private Sector’
Asiwaju Bola Tinubu said these foundations now require more builders to make it a massive structure, calling on all Nigerians to embark on the journey with him.
Here, I want to congratulate President Buhari once more because he has really laid a solid framework for the work we have ahead of us.
“No previous administration has accomplished what the Buhari administration has in the areas of agriculture, infrastructure, and power. Additionally, his administration returned thousands of displaced people to their homes and freed hundreds of communities from terrorist control.
“In fact, the groundwork has been done. It is now time to call on additional builders to continue building the national structure that will serve as our ideal home. In order to establish a lasting covenant of progressive good government with the people, the APC and the Tinubu/Shettima team are working to do so.
“Under this hopeful agreement, we will put together the best squad,” he continued.
“By establishing commodities boards that ensure minimum pricing for critical crops, we will build on the achievements in the agricultural sector.
“In every zone, we’ll build industrial and agricultural hubs. Additionally, you’ll witness irrigation and water catchment systems that will aid farming while reducing the disastrous consequences of drought and flooding brought on by a changing climate.
“Through a national industrial strategy that uses a number of measures, including tax and employment incentives, we will promote employment in metropolitan areas. The knowledge economy will expand. Our whole economy will gain, as well as millions of the tech-savvy, creative youth. Young people with talent will be employed by our government. Through the use of natural gas and sensible reforms to the entire power industry, we will increase the available electricity.
You can read more of such stories at The Cheer News and Credible News

Obi To Soludo: It’s Your Turn To Deliver As A Professor, I Governed Anambra As A Trader