MC Oluomo, the chairman of the management committee for the Lagos State Parks and Garages, and other supporters of Bola Ahmed Tinubu, the APC presidential candidate, organized a demonstration in Lagos on Sunday.
Bolaji Akniyemi, a Facebook user, regretted the suffering that some Lagosians through.
The event caused difficulty for the locals and hours of traffic congestion for many commuters.
The march started at the Teslim Balogun Stadium with a huge audience, and it finished at Oshodi.
Bolaji Akinyemi,lambasted the organizers for scheduling the walk on a Sunday morning in a lengthy post.
How was it like for people whose churches were along the route of Oluomo’s 5 million-man march to get to church this morning, in particular?
A 5 million man march on a Sunday morning at 8:00 am in support of a Muslim/Boko Haram ticket? I take objection to our insensitivity as Christians, you know. We spoke but did nothing. Go to church and witness “Muslims” marching to take the state in their throngs, they have now proclaimed in front of our faces in Lagos, loud and clear. 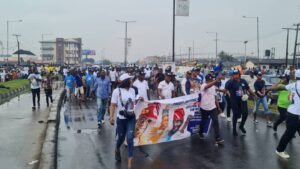 “To me, it’s an understated way of conveying that we are unimportant! I am aware that many of you would prefer to keep things nice, and in all honesty, that is what should happen, but this is not your typical situation. Please forgive my rudeness if it offended you; I am in this place by divine mandate and know things in ways that I cannot explain. I also apologize if my views on politics or religion offended you. I’m zealous about keeping Nigeria as a secular state, which is what it ought to be.
You can read more of such stories at  The Cheer News
2023: PDP Chieftain, Dr Nnamani Clears Tinubu Of Ill Health
Tinubu Plans To Repeat Lagos&#8217;s Achievements In Nigeria- Akeredolu
Tinubu Will Select The Events He Will Go To- APC
“Are they allowed to go for a walk on a Sunday? Naturally, they do! However, the point has been made: Lagos has more people who have no business attending church and would prefer to go for a walk instead of attending services on Sunday! Live with it moving forward, then. Id el Maulud took place on Saturday, October 8, which was yesterday. Monday, October 10 has been set aside as a holiday. Thus, Id el Maulud is observed as a public holiday tomorrow. I would like to ask you a few questions before you start calling me names. Why, in light of the upcoming holiday, was the walk not planned for tomorrow, Monday?
Does this imply that no Christians in the newly formed Lagos State Park Union felt the need to worship the Lord today? Please, considering a walk in Kano on a Friday and scheduling it to begin at 1pm, is it civil, polite, and sensitive (legality is not the issue)?
These issues are more complex than we realize. Politics is the graveyard where this generation will either bury faith or resurrect it by turning it into a sacred space where the name of our Lord must be revered and venerated. I’ve made my point.
You can read more of such stories at The Cheer News and Credible News