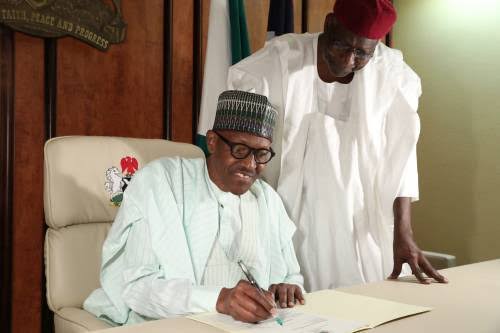 On arrival from London, President Muhammadu Buhari spoke for the first time on the sack of some aides in the office of Vice President Yemi Osinbajo.

Buhari said that the action which sparked heated reactions with some claiming the powers of the Vice-President had been whittled down. It was purely a reorganization with no political or ethnic undertones.

President Buhari spoke about the controversial move on Friday night when he returned to Nigeria after a private visit to the United Kingdom.

Buhari said: “We are going to work harder, be accountable and try to make Nigerians understand why we do certain things whether they appreciate it or not.;”

“Like, they said 35 people were sacked in the Vice President’s office. We just created a ministry and we reorganised and people are giving ethnic and political dimensions. It is unfortunate.”

Since the start of President Buhari’s second term, there have been claims that the office of the Vice President was being weakened. It is a claim the Presidency has repeatedly denied.

The establishment of an Economic Advisory Council to report directly to the President, to replace the Economic Management Team, which was chaired by Professor Osinbajo, fueled the claims.

As news of the firing of the VPs aide made the rounds, the claims resurfaced with the Presidency issuing statements insisting that there is no rift between both men and that the move was part of a reorganisation in the government.

President Buhari maintained the “reorganisation” position in his brief comments on the matter.