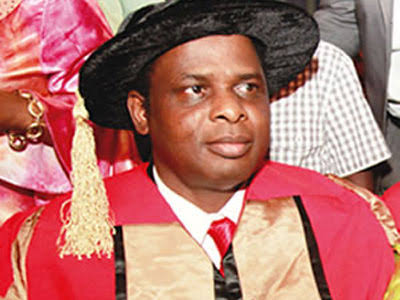 The Board of Trustees (BOT) of Chrisland University, Abeokuta on Monday, 18th November 2019 approved the appointment of Professor Ayodeji Oladimeji Olukoju as the Pro-Chancellor and Chairman of the Governing Council of the institution.

Professor Olukoju, a former two-term Vice-Chancellor of Caleb University, obtained a First Class Honours degree from the University of Nigeria, Nsukka in June 1980, and the MA and PhD degrees from University of Ibadan in 1982 and 1991, respectively.

He lectured at the Ogun State University (Olabisi Onabanjo University) between 1984 and 1987, before joining the services of the University of Lagos in 1987.

He was appointed a Professor of Maritime and Economic History in 1998 and Distinguished Professor of the University of Lagos in 2018.

He was at various times between 2001 and 2009 Head, Department of History and Dean of Arts, University of Lagos, and was inducted Fellow of the Nigerian Academy Letters in 2011.

The Pro-Chancellor has over 140 peer-reviewed publications, including authored and edited books, and articles in leading journals of global, maritime, economic, social and African history.

A recipient of the British Academy, Japan Foundation, DAAD, IDE (Japan), Chapman and Leventis Fellowships, and a WARA Residency at Emory University, Professor Olukoju was twice University of Lagos Best Researcher in the Humanities and the first-ever African member of the Executive Committee of the International Maritime Economic History Association.

He has consulted for UNESCO, Ford Foundation, WOTRO: The Netherlands Foundation for Tropical Research, SEPHIS, CODESRIA and the Israel Science Foundation, and served on the Governing Council of the Nigerian Institute of International Affairs, the Advisory Boards of the African Peacebuilding Network, New York and University College London Urban Laboratory, and editorial boards of Journal of African History, African Economic History, History in Africa and Afrika Zamani.

The Chancellor of Chrisland University, High Chief Dr. (Mrs.) Winifred Awosika, who noted that Distinguished Professor Olukoju had been a resource person for Chrisland Schools over the years, urged him to justify the confidence reposed in him by the BOT of the University.

She further charged him to maintain the high standards for which he is renowned in the discharge of his responsibility as Chairman of the Council and wished him success in his new assignment.

Professor Olukoju’s appointment as the Pro-Chancellor is in furtherance of Chrisland University’s mission of creating a learning environment founded on a sound moral and intellectual culture that attracts an excellent blend of faculties from across the world and deploys resources to educate the total person.