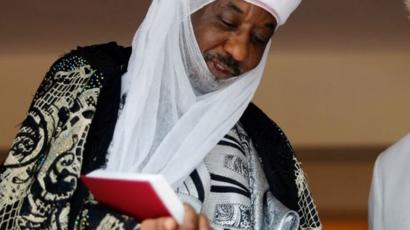 Dethroned Emire of Kano, Muhammadu Sanusi II has been moved to four different places within twenty-four hours of his removal by the Kano Government Council.

Muhammadu Sanusi II was forced out of his palace on Monday and banished immediately to Opanda town in Toto Local Government Area of Nasarawa State.

Following that, the Nasarawa State government moved him the former Emir to Loko village in Nasarawa.

He is presently being kept at the Nasarawa State Government House in preparation for movement to Awe LGA.

In the next few hours, Muhammadu Sanusi II would be on his way to Awe village, making the fourth place he had stayed within twenty-four hours of his removal from office.

Relocating the former Emir to Awe may not be unconnected to the remoteness of Loko village to the Local Government Area of the community.

READ ALSO: Sanusi’s Removal as Emir of Kano is Good and Bad – Obasanjo

“Others who called the governor were Alhaji Aliko Dangote and General Aliyu Gusau amongst others,” the source said.

It was alleged that Sanusi’s removal as Emir Sanusi was due yo disrespect to the office of the governor and other government agencies.

He said the removal was in line with consultation with relevant stakeholders.

UK, Republic of Ireland Added to US Travel Ban Over Coronavirus