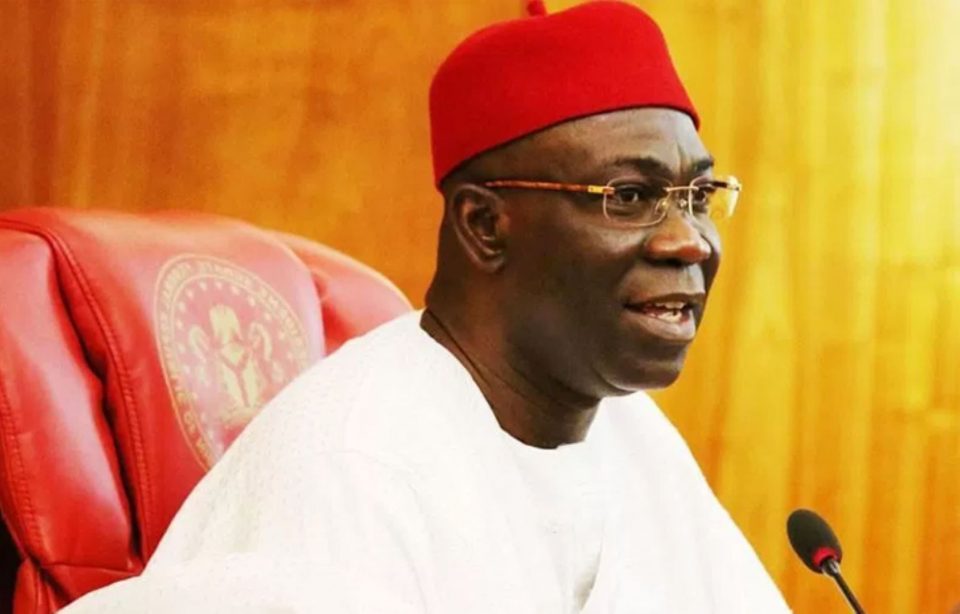 He noted that while the intent might be good, the action was unnecessary and unconstitutional.

Ekweremadu also picked holes with the controversial Control of Infections Disease Bill 2020 and the National Health Emergency Bill 2020 before the National Assembly.

According to him, they negate the Constitution and could not possibly succeed as currently drafted.

The former Chairman of the Senate Committee on Constitution Review equally criticised the restriction of movements and other rights, ordered by the Federal Government and several states in managing the COVID-19 pandemic.

He said that while the restrictions were “absolutely necessary,” they “failed the constitutionalism test” and could only be overlooked on the grounds of Doctrine of Necessity.

The Senator, who holds a doctorate degree in Constitutional Law, aired his views while fielding questions on “Political Voices”, a current affairs programme on Dream FM, Enugu on Friday according to a statement by his media aide, Uche Anichukwu, in Abuja.

Ekweremadu said: “There has been a lot of misconception regarding that Executive Order. In the first place, it was quite unnecessary.

“We, the members of the 8th Assembly, passed the amendment to the Constitution to grant financial autonomy to the State Judiciary and Legislature because we believed that for the sake of their independence, they should be on the First Line Charge of the states Consolidated Revenue Account.

“And when we passed them, President dutifully signed them into law (over a year ago).

“That should have been the end of it because the amendments are self-executing.

“We expected that having done that, the states should go-ahead to work out the modalities. But that didn’t happen.

“So, the President now set up a committee headed by the Attorney-General of the Federation to work out the modalities for implementation.

“I think it was at that point that they deemed it necessary to come up with an Executive Order to strengthen the implementation.

“But regrettably, they have simply mutilated those provisions of the Constitution as amended.

“Now, they are adding some aspects suggesting to the states how to manage their funds because part of that Executive Order is that in the next three years, the judiciary in the states should dedicate part of the monies coming to them to capital projects for the State Judiciary.

READ ALSO: Ekweremadu Says Only God Can Determine His Political Future For 2023

On the way forward, Ekweremadu advised the Governors to approach the President and point out those mistakes so that he could withdraw the executive order.

“And unfortunately, if they go to court, the implication is that the application of that amendment regarding financial independence of the State Judiciary and State Assembly will be put on hold because so long as they are in court those provisions will not be implemented.

“So, it is something the Governors and the Attorney General and the President need to settle amicably,” he said.

Ekweremadu also allayed fears over the infectious disease Bills before the National Assembly.

He said: “Let me use this opportunity to reassure Nigerians that the bill as presently presented will not be passed by the National Assembly. A lot of parliamentarians have lined up to oppose it.

“Parliament is essentially a market place of ideas. And like every other market, if you come to the market with a product that is not very good, you are not likely going to sell it.

“So, my colleagues in both chambers are entitled to presenting the Bills but whether that will succeed or not is another kettle of fish.

“Looking at that Bill, which is intended to deal with dangerous or infectious diseases, it appears to me that the Bill is even more dangerous than the diseases they are meant to control.

“If you look at some parts of the Bill, it says if you have any problem with the order or actions of the Nigeria Centre for Disease Control, NCDC, you have to appeal to the Minister and whatever the Minister says will be final.

“But Section 4 (8) of the Constitution says that no attempt should be made by the National Assembly or any State Assembly to make any law that ousts or purports to oust the jurisdiction of the court. In other words, you have the right to go to court if you have any issues.

“So, to that extent, that Bill is null and void, unacceptable, and unconstitutional.”

He also cited infringements on democratic freedoms, such as freedom of association, freedom of movement, freedom to own properties, among others, as some of the weaknesses of the Bill.

“To that extent, the Bill is unconstitutional because it gives the agency the right to breach those rights, take over people’s properties, prevent them from moving around, other infringements on rights and the Constitution provides that if any law is inconsistent with the provisions of the Constitution, that law is null and void to the extent of those inconsistencies.

“As I said, my colleagues have the right to present the Bill, but I can assure Nigerians that that Bill will not be passed as it is presently”, he added.

Meanwhile, Ekweremadu commended the Federal Government and many states for their commendable efforts in handling the COVID-19 pandemic.

The lawmaker representing Enugu West Senatorial District wondered why the Federal Government failed to invoke Section 305 of the Constitution.

“I think the pandemic itself is an emergency situation that requires an emergency response. But some of the things we have done can only be accommodated under the Doctrine of Necessity because we have done things that are infringements to our own Constitution.

“Let me make myself clear, the response itself and actions taken by the Federal Government and the states have taken were absolutely necessary.

“But legally speaking, they failed the test of constitutionality because a lot of human rights contained in the Constitution have been infringed.

“That was why I said they could only be accommodated under the doctrine of necessity.

“We have seen shutdowns. We have seen the closure of state borders. Those things are certainly not in tandem with a democratic society because if we weigh them strictly against the Constitution, nobody can be stopped from moving from one part of the country to the other. You cannot stop people from going to church or going to market.

“But the Constitution envisaged such situations and provided for them. If you go to Section 45, you would see that human rights could be legally abridged if there is a State of Emergency properly declared by the President.

“These are the provisions the Constitution has made to manage a situation like COVID-19, which we could have followed.

“So, I expected the President to take advantage of Section 305 of the Constitution, which deals with emergency powers or the State of Emergency.

“The President could have simply declared the State of Emergency and send the gazette containing the emergency to the National Assembly.

“The National Assembly is enjoined to accept or reject it within fourteen days. But until that happens, the Proclamation takes effect.

“A Governor can also ask the President, through a resolution of the State House of Assembly, to declare a State of Emergency in a state or any part thereof.

“All said, this is not a time to be legalistic, but going forward we should know that if we make laws for ourselves, we need to obey the laws.

“Overall, so far so good. The governments at the centre and in many of the states have done well in managing the pandemic,” Ekweremadu said.