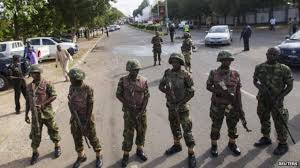 The Nigerian Army has on Tuesday said that there would not be military roadblocks in Lagos and Ogun except where necessary. adding that enforcing lockdown compliance is Police’s Job.

General Officer Commanding (GOC) 81 Division Maj.-Gen. Olu Irefin posited that the soldiers would remain in the barrack until when called on by the civil authorities.

Gen Irefin said enforcing lockdown compliance was a job for the police and other civilian law enforcement agencies, adding that the military can only intervene where the need arises for it to do so.

Irefin said: “The military will only come out if it becomes absolutely necessary and on instructions from higher headquarters.

“There will be no roadblock by the military. The police will be the lead agency and military will only come out to support if necessary.”

Meanwhile, the Nigerian Navy (NN) said only ships that have stayed in the sea for 14 days upwards and whose crew members are free of the COVID-19 symptoms will be allowed into the harbour.

Flag Officer Commanding (FOC) Naval Training Command such ships must also have thermal sensing equipment/device to detect abnormal temperature readings when personnel are scanned, adding that this move was to ensure persons already infected with the virus do not enter the country through the waterways.

Asked the role the navy was playing during this lockdown period, Daji said the command already sent its representatives to the multi-agency TaskForce led by the Ministry of Humanitarian Affairs and NEMA.

He said: “The committee is working out the details and hopefully, the mechanism for enforcement of the partial lockdown announced by the federal government will be reeled out after the meeting. The details are still being worked out at the moment.”

On ships that will be allowed in within this period, he said: “Ships that have been at sea for a period of not less than 14 days and without any case of symptoms by crew members.

“Such ships are also required to have thermal sensing equipment/device to detect abnormal temperature readings when personnel are scanned.”

WHO Records 5,013 Cases In 46 African Countries