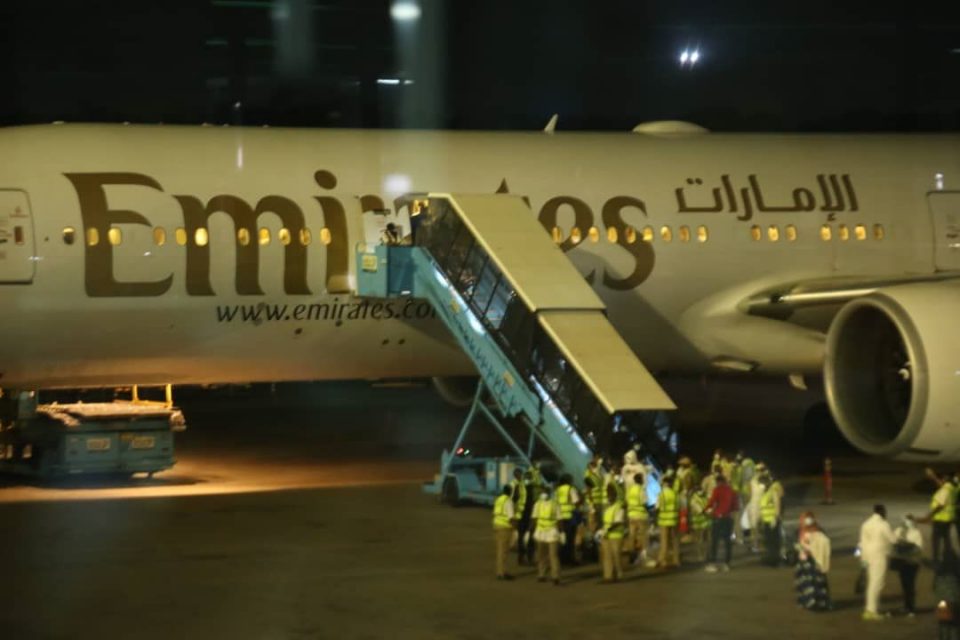 The 255 Nigerians evacuated from the Arab country eventually arrived Wednesday at 7 pm without the newborn baby and her mother, as both were still in Dubai hospital when other passengers left for Nigeria.

Recall that TheCheer reported on Wednesday that a Nigerian lady, Mrs Kafayat Amusan, who was among stranded Nigerians in Dubai, United Arab Emirates, was delivered of a baby boy aboard Emirates Airline en route Lagos.

Emirates Airline had to change to another aircraft, which brought the remaining 256 Nigerians back.

Amusa put to bed 30 minutes after departure, which resulted in the plane returning to Dubai. She was admitted into a hospital in Dubai.

The evacuees were taken to the isolation centre prepared by the Lagos State Government and National Centre for Disease Control (NCDC).

After alighting from the aircraft, they were profiled by security, health and border control officials.

Also on Wednesday, the Federal Government ruled out palliatives for Nigerians abroad.

This is as the government also urged prospective returnees from the United Kingdom to pay to the agent appointed by the Nigeria High Commission in the UK.

Over 2,000 Nigerians are stranded in the UK alone, it was learnt.

Minister of Foreign Affairs, Mr Geoffrey Onyeama, at the daily briefing of the Presidential Taskforce on COVID-19, said those who desire to be evacuated should pay to the appointed agent.

The minister told stranded Nigerians in China that their existing tickets were not valid for the planned evacuation.

He said they need to pay for the chartered flight.

On palliatives, Onyeama said: “We do sympathise with Nigerians everywhere in the world, not just South Africa. We know the suffering so many of our people are going through, including right here in Nigeria, but I don’t see how it (palliative) will be possible.

“So, I am sorry that the palliatives are really destined for Nigerians here in Nigeria.”