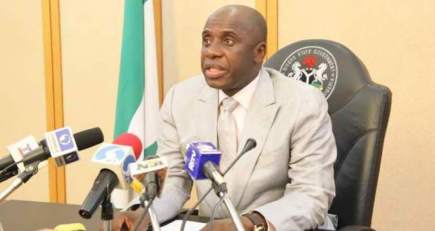 The presidency, through the Nigerians in Diaspora Commission (NIDCOM) has reacted to the attack on Minister of Transportation, Rotimi Amaechi in Madrid, Spain by some members of the Indigenous People of Biafra (IPOB) while on national assignment.

WITHIN NIGERIA recalls that the Minister, yesterday personally announced the incident on his Twitter handle.

Meanwhile, the NIDCOM chairman, Abike Dabiri-Erewa, while reacting in a statement she signed, condemned the attack, also  commended the prompt intervention of the Nigerian Mission in Spain and the Spanish police.

She said: “We applaud the prompt intervention of the Nigerian Mission in Spain as well as the Spanish police who ensured that the attacks did not escalate any further.

“Information indicates that the case is being handled by the Spanish Police.

“We appeal to Nigerians to be of good behavior wherever they find themselves because such incidents ultimately tarnish the image of the country within the host country, with multiplier negative effects on Nigerians living in that country, who are law abiding and well behaved”.

Meanwhile, the Indigenous People of Biafra, IPOB, have claimed responsibility for the attack.