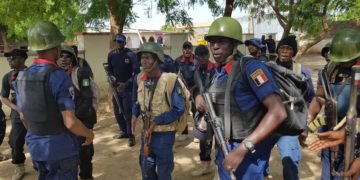 The Ekiti State Commandant of the Nigeria Security and Civil Defence Corps (NSCDC), Mr. Solomon Iyamu, has said the corps has arrested two herdsmen for allegedly invading farmlands with cows.

He said the arrests were made possible through a joint operation of the Agro Rangers Unit of the command, the Army, Police, Ekiti State Anti-Grazing Agency and men of Vigilante Group of Nigeria (GVN).

The operation, which Iyamu said lasted for about six hours, occurred at Ago Aduloju and Ogbese axis of Ise-Orun and Gbonyin local governments.

He alleged that the herdsmen were arrested following a tip-off that herders had invaded farms along Ado/Ijan in search of pasture to feed their cows.

Iyamu said the herdsmen would be arraigned after investigation.

He appealed to farmers to be law-abiding and report any perceived herders’ threat to men of the Agro Rangers Unit for action.

Iyamu hailed the joint operations for the collaborative work and urged them not to relent in the discharge of their duties.

He praised NSCDC Commandant-General Abdullah Muhammadu for his efforts to end farmers/herders clash across the country through the establishment of Agro-Rangers Unit.

Lady Sleeps with Dog for N3m