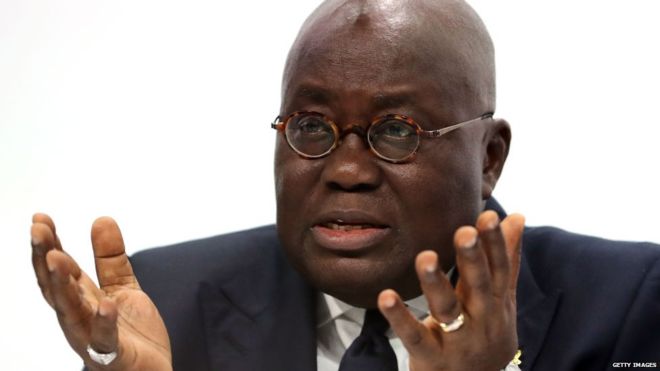 President of Ghana Nana Akufo-Addo has asked his African peers to cease pleading with the West for loans so that Africa can gain respect around the world.
If the African nations quit begging, he claimed, the developed nations’ negative impressions of the continent will change. This is according to Africa News.
This was stated by the president of Ghana during his opening remarks at the ongoing US-African Leaders Summit on Tuesday in Washington.
He argued that riches in Africa should be used to develop the continent and get recognition.
“Africa won’t need to beg for respect from anyone if we stop being beggars and spend African money on the continent; we will receive the respect we deserve”, said Akufo-Addo.
The International Monetary Fund (IMF) had just agreed to lend Ghana $3 billion (£2.4 billion) to help the country recover from an unheard-of economic collapse when Akufo-Addo issued his warning.
READ ALSO: Why Atiku Should Be Nigerian’s President, Omokri
Ghana, which already has a heavy debt load, is experiencing historically high inflation of more than 40%, a decline in the value of its currency, the cedi, and economic problems that have gotten worse since Russia invaded Ukraine.
For a significant summit that President Joe Biden is hosting, close to 50 African leaders and representatives are in Washington, DC.
It serves as the focal point of a significant initiative to restructure and strengthen US connections with African nations, whose links with China and Russia have come under investigation.

MOMAN, Transparency, Fairness Are The Remedies To An Efficient Fuel Supply

Give To The Ukraine’s, They Are Suffering, Pope Francis