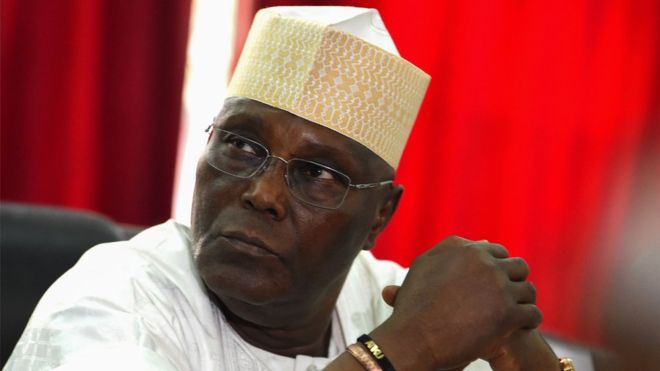 Alhaji Atiku Abubakar condemned the bill being conceived by the National Assembly to tackle hate speeches and social media. He said it is an abuse of legislative process.

In a statement on Tuesday, Atiku said the bill is one which will violate right to Freedom of Speech.

Atiku said that the bill sponsored by Senator Sabi Abdullahi is obnoxious. He said the lawmakers should rather make laws to tackle pressing domestic challenges across the country.

Atiku Abubakar said: ”I wish to sound a note of caution to those toying with the idea of an Anti Hate Speech Bill, with punishment for supposed.

”Hate Speech to be death by hanging. The contemplation of such laws is in itself not just hate speech, but an abuse of the legislative process that will violate Nigerians’ constitutionally guaranteed right to Freedom of Speech.

”Those behind this Bill to awake to the fact that Nigeria’s democracy has survived its longest incarnation. Because those who governed this great nation between 1999 and 2015 never toyed with this most fundamental of freedoms.

”It is prudent to build upon the tolerance inherited from those years and not shrink the democratic space to satisfy personal and group interests.

”Freedom of Speech was not just bestowed to Nigerians by the Constitution of the Federal Republic of Nigeria, 1999 (as amended), it is also a divine right given to all men by their Creator.

”History is littered with the very negative unintended consequences that result when this God-given right is obstructed by those who seek to intimidate the people rather than accommodate them.

”We should be reminded that history does not repeat itself. Rather, men repeat history. And often, to disastrous consequences.

”Nigeria presently has too many pressing concerns. We are now the world headquarters for extreme poverty as well as the global epicentre of out-of-school children.

”Our economy is smaller than it was in 2015, while our population is one of the world’s fastest-growing. We have retrogressed in the Corruption Perception Index of Transparency International, from the position we held four years ago, and our Human Development Indexes are abysmally low.

”It, therefore, begs the question: should we not rather make laws to tackle these pressing domestic challenges, instead of this Bill, which many citizens consider obnoxious?”