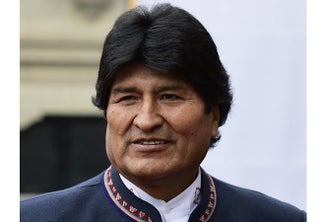 From Leon Trotsky to Luis Bunuel to Salvador Allende’s widow, Mexico has a long tradition of offering asylum to political exiles — right down to newly arrived Bolivian ex-president Evo Morales.

Whether Republicans fleeing Francisco Franco after Spain’s country’s Civil War or Argentines, Chileans and Brazilians fleeing military dictatorships in the 1970s, Mexico has welcomed many thousands of political asylum-seekers over the years.

“I’m very proud to head a government that guarantees the right to asylum,” President Andres Manuel Lopez Obrador said Tuesday, as Morales arrived after resigning amid growing unrest triggered by his controversial re-election to a fourth term.

Morales, for his part, said Mexico “saved my life,” after exiting the Mexican air force plane sent to fetch him from a Bolivia in flames.

According to retired Mexican diplomat Agustin Gutierrez Canet, the first political figure granted exile in Mexico was Nicaraguan revolutionary Cesar Augusto Sandino, who led an uprising against the US military occupation of Nicaragua in the 1920s.

However, Sandino left Mexico in 1930, frustrated at what he called the Mexican government’s broken promise to aid his cause.

Exiled from the Soviet Union in 1929 by Joseph Stalin, the Marxist revolutionary drifted from Turkey to Norway to France before finally landing in Mexico in 1937.

“It was the muralist Diego Rivera who asked President Lazaro Cardenas to grant (Trotsky) asylum. But we all know the consequences. Mexican protection failed and Ramon Mercader came along,” said Gutierrez.

Mercader, a Spanish communist and secret agent for the Soviet intelligence services, infiltrated Trotsky’s inner circle, then assassinated him with an ice axe at his home in 1940.

Under Cardenas, who was president from 1934 to 1940, Mexico also welcomed more than 20,000 Spanish exiles fleeing Franco’s regime after the Republicans’ defeat in the Civil War.

JAMB Introduces Special Platform for Candidates With 250 Score and Above

ISWAP won’t be allowed to take over Nigeria, says Military