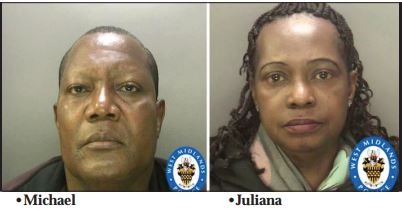 Michael Oluronbi and Juliana, the husband and wife whose photographs appeared above were guilty of rape in the United Kingdom and sentenced to 34 years imprisonment.

Pastor Michael was adjudged an expert in bathing for women with problems who come to his church for solutions.

He was also said to have been guilty of consistently raping children in his church for over twenty years.

The self-acclaimed prophet of God was found guilty in January of offences against six women and a man. Five of those attended his church.

According to reports, Prophet Oluronbi capitalises on the gullibility of his church members problems by convincing them to take part in a spiritual bathing ritual for cleansing.

The presiding judge, Justice Sarah Buckingham, after hearings and cross-examination of evidence levelled against him sentencing him to 34 years behind bars.

According to the judge, Michael case was “one of the worst cases of sexual abuse of multiple children to come before the courts”.

She said Michael Oluronbi was an arrogant, selfish and vain man.

Her words: ”Spiritual baths were actually designed to fulfil his insatiable sexual appetite

“The children feared you and this enabled you to continue your grip. “Your offending has had an extreme and severe impact on all of your complainants.

“Any attempt to suggest otherwise would be without foundation.“You abused your position of trust – they trusted you like God.”

Oluronbi was convicted of 15 counts of rape, seven counts of indecent assault and two counts of sexual assault, at Birmingham Crown Court.

Oluronbi’s wife, Juliana, was also convicted of three counts of aiding and abetting rape and helping arrange some of the abortions of his victims, with some becoming pregnant multiple times. She was jailed for 11 years.

As a pharmacist, she would take them to clinics to end the pregnancies.

During the trial, the jury was told how Oluronbi was linked to a Christian church in Birmingham, where he formed a splinter group for about 40 adults and children, separate to the church and in another location.

In that group, he had the victims take part in “spiritual bathing”.

It was gathered that Oluronbi would sometimes laugh in court while giving evidence, DS Walton said. He worked as a pastor until his arrest.

He was arrested at Birmingham Airport while trying to leave for Nigeria — with ceremonial belongings and a sum of cash.

Attack on Jonathan, APC’s Attempt to Divert Attention from Corruption in Buhari’s Administration-PDP Fires Back at APC