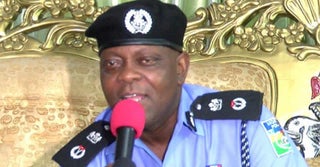 The new Police Commissioner in Ogun State, Edgal Imohinmi, on Tuesday vowed to flush out police officers whose conducts were not only attracting opprobrium to the Command, but also standing in the way of rebranding the force for effective crimes prevention and combating in the state.

Imohinmi also assured that the upsurge in burglary cases in Abeokuta and its environs would be seriously tackled within a short time, and blamed the occurrence to inadequate personnel on ground to effectively man the residential areas and other strategic locations.

The Police Commissioner who spoke in Eleweran, the Command’s Headquarters while addressing reporters, disclosed that he has established “Citizens Complaints Reports Centre,” with dedicated series of hotlines the public could call any time to report observed unprofessional and misconducts of officers and men of the Ogun state Police Command.

#UkraineRussiaWar: What If Putin Declares Martial Law In Russia