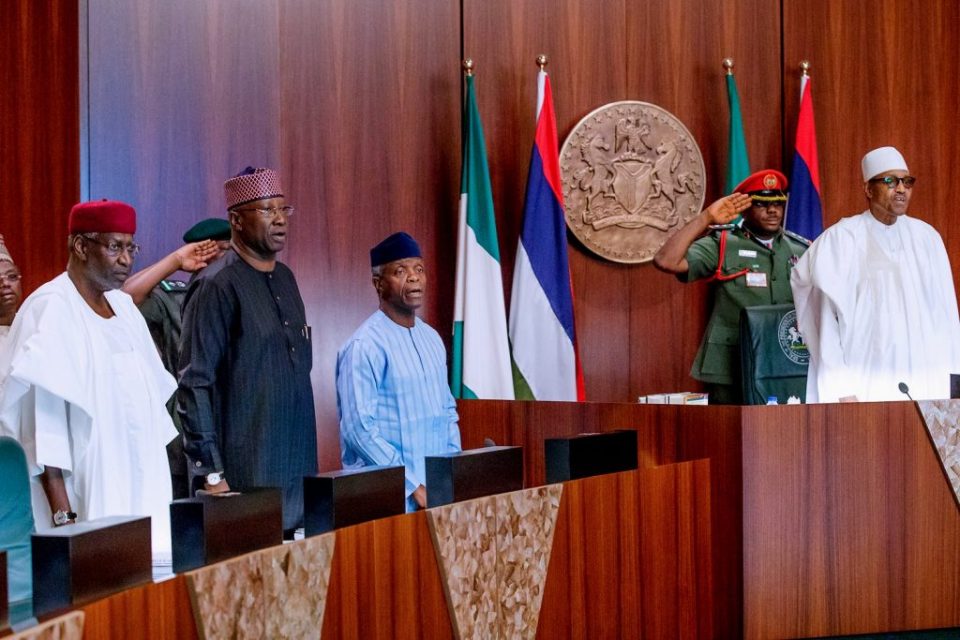 Federal Government of Nigeria on Wednesday said it has released the sum of  N650 billion for capital projects in the 2019 budget.

This is just as the Federal Executive Council, FEC has approved for Nigeria to subscribe additional 3,230 shares worth $50.637million in the International Bank for Reconstruction and Development (IBRD) of the World Bank.

FEC also approved a draft of Executive Bill to be sent to the National Assembly for legal framework for the National Metallurgical Training Institute, Onitsha, Anambra State.

Meantime, the Council has approved the sum of N1. 7 billion for the award of contract of a jetty in Borno, Rivers State.

Briefing State House correspondents at the end of the weekly FEC meeting presided over by Vice President Yemi Osinbajo at the Council Chamber, Presidential Villa, Abuja, the Minister of Finance, Budget and National Planning, Mrs Zainab Ahmed said that additional N250 billion would be released by December 2019 to bring the total releases for capital projects to N900 billion.

Mrs Ahmed explained that the figure had already surpassed the N600 billion President Muhammadu Buhari directed to be released as of October.

She recalled that the government had issued a number of Sukuk Bonds targeted at generating money to fund road projects, adding that not all roads were federal-government roads.

She noted that the majority of bad roads belonged to the various state governments.

While responding to the excuse given by the Minister of Works and Housing, Mr Babatunde Fashola, that poor funding was the reason road projects were not executed at a faster pace, Ahmed explained that much as the government was faced with revenue challenges, works, housing, power and transportation had so far received the highest releases.

She said, “Works is always on the priority list; housing is always funded, same is transportation and power, though we have revenue challenges.

“It gives me an opportunity to state that the Minister of Works and Housing has a proposed budget of N247 billion for the year 2020 and the greatest component of this budget is the fixing of Nigerian roads.

“Our fiscal space is tight, resources are limited because revenues are on the performing but at the time we have resources, funds to release, the highest proportion goes to Power, Transport, World and Housing.

And also we have introduced some measures that have seen private sector participants getting involved in road construction.

One of these measures is the Road Infrastructure Task Credit Scheme that Mr President approved by Executive Order early this year so far we have 17 companies that are carrying out 19 roads across the six geo-political zones.

“I also want to remind you that for the past two years, we have issued Sukuku bonds. In 2017, it was for the construction of 25 roads. In 2018, 23 roads and there is also another one that is being processed.

“We have a lot of roads in the country but not every road you see is a responsibility of the Federal government.

“Have we done enough? No, not yet, that is why we are trying to do more including raising special funds to make sure that roads and such other infrastructure are being addressed.

“In October, when the President was submitting the 2020 budget to the National Assembly, he had indicated that he had given a directive that we should release N600 billion for capital expenditure, we have already released more than that, the target for us is to be able to release up to N900 billion by December 2019.

But right now we are at about N650 billion capita release so far.” Meanwhile, said that IBRD at the last meeting of the World Bank Group adopted in 2016 granted approval for Nigeria to secure the additional shares subscription, noting that Nigeria prior to now had a share capital of 1,687 shares at the IBRD.

The Finance minister explained that with the increase in the share capital will assist in strengthening the country’s position and enhance the nation’s voice in the global financial architecture.

She said: ”This afternoon, we presented a memo to the Federal Executive Council. The memo is on additional capital increase for Nigeria at the international bank of Reconstruction and Development.

Prior to now, Nigeria holds 16, 187 shares at the IBRB. ”During the last meeting of the World Bank Group, a capital increase was adopted in October 2016 and an additional allocation of 3, 230 shares was allocated to Nigeria, both for general capital increase as well as selected capital increase.

The total value of these shares is in the sum of $50, 637, 747.60m. ”This additional subscription to the Bretton Woods institution by Nigeria is not just desirable but necessary.

It will strengthen the country’s position and enhance our voice in the global financial architecture. ”It is important that we also reported to council that Nigeria is now classified by the World Bank as a middle-class income country by reason of its GDP of over $387b and a per capita income today or as at the end of 2018 of $1,960 per head.

This makes Nigeria qualify for a Bretton status in the World Bank group that gives a country the leverage and enables us to access some less restricted resources of the bank both at the IBRD as well as the either windows.”

According to the Finance minister, the subscription of shares will enhance the future of the status of Nigeria as a middle-income country as well as project the image of the country as strong emerging market.

”We are required to at the end of March 2019 to have accepted this offer. We have done the acceptance, we went to council today to get an approval to submit a memorandum of law to complete the documentation of the subscription process and council approved our prayers.”

“Let me give you a little background on it. Some years ago, we had a jetty at Bonny Island but it collapsed and now creating huge problem for top boats and pilotage.

The pilot land is in Bonny so boats used to come from Port Harcourt to pick up the pilots. “Today, the Council give approval in favour of Messrs Due Projects Ltd for N1. 7 billion and it will be completed in 15 months time.”

The Minister of Mines and Steel Development, represented at the briefing by the Minister of Information and Culture, Alhaji Lai Mohammed said that the council gave approval for the National Metallurgical Training Institute Establishment Bill.

He explained that, “This is a bill before the National Assembly to establish in Onitsha, Anambra State a National Metallurgical Training Institute.

It was actually established in 1980 following the report of the feasibility study carried out in 1979 by the German Agency for Technical Cooperation which observed the lack of skilled manpower to run and maintain heavy mechanical and electrical equipment in Iron and steel, oil and gas and Allied Industries.

“As a result, Nigeria and Germany signed a bilateral agreement for the German government to provide equipment and organize foreign training for Nigerians who in turn are to train indigenous low and middle-level technical workforce for the metal sector.

“The Nigerian government, on the other hand, is to provide the physical infrastructure. The two countries implemented the agreement until 1995 when the German government could no longer sustain the support, leaving Nigeria to completely take over the running of the institute program.

“The council was invited to know that the institute has been operating without any enabling law since its establishment.

The purpose was to send a bill to the National Assembly that will provide a legal framework for this institute.”

He said that another memo from the ministry was for an approval for the ratification of the Statute of African Minerals Development Center.

He said,” It was a declaration by the  African Union Heads of States and Government on the 50th anniversary of the AU to develop and utilize natural and human resource endowment as the basis for the Industrialization of the continent.

” The key objectives is to ensure that Africa’s interests and concerns in the mining sector are properly articulated and internalize.

The Centre also aims to contribute to the highly skilled and knowledge-driven mining sector which delivers greater economic and social benefits as a result of high productivity level.

“The centre supports member states in the formation, harmonization said implementation of coherent policies and fiscal regimes which gears towards development of the mining sector.”

Why LASPOTECH Rector Must Step Aside – Coalition of Civil Society Group