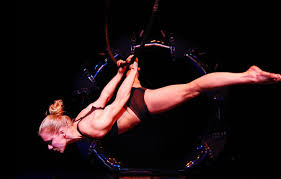 An acrobat has been injured in front of hundreds of people at the Winter Wonderland event in Hyde Park.

Jackie Armstrong’s foot is believed to have slipped from her harness causing her to crash to the floor at the Zippos Christmas Circus Show.

Witnesses said she did not get back up and staff rushed over to her after the 30ft fall during the Cirque Berserk performance.

An audience member said: ‘The lady had one foot in the loop with no actual harness and her foot slipped out and she fell to the floor diagonally.

‘Kids were on the front row and there were people screaming.

‘She was yelping in agony, it was traumatic as she bounced as she hit the floor. There was an announcement after a min or two to all leave.’

The circus was evacuated as paramedics went to her aid following the 6 pm performance. A spokesman for Zippos said: ‘The female British artist, Jackie Armstrong, performs an aerial act and is a highly experienced circus artist with 10 years in the ring.

‘Jackie was immediately attended to on the scene by first aiders and an ambulance called. She was taken to hospital by ambulance and further information on the nature of her injuries is awaited.

‘Immediately following the incident, audience members were asked to leave the Big Top and offered tickets for the next performance that evening.

Founder and Director Martin Burton told MailOnline: ‘Jackie is a very experienced artist whom we value dearly as part of our circus family.

‘Clearly we are concerned and offering her and her family our full support and sympathy at this time.

‘At this stage, we cannot comment further as we have no information on any injuries she may have sustained.’

Goods Worth N1.45trn Smuggled into Nigeria from Benin Republic Annually