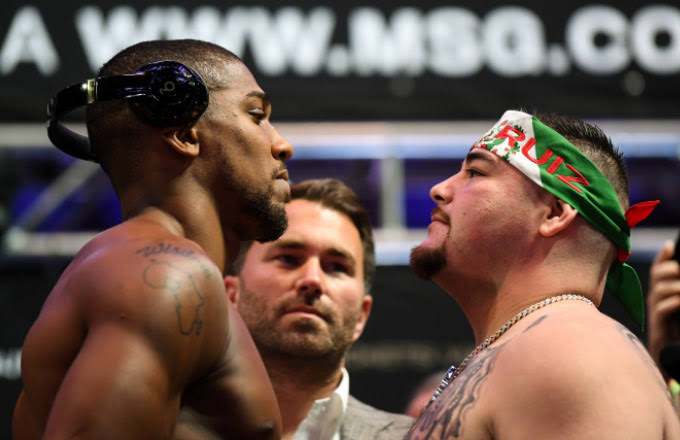 The two heavyweight giants fight on December 7 in a Saudi Arabia showdown dubbed the Clash on the Dunes.

AJ lost his four title belts to the Mexican in that extraordinary bout back in June. And landed in the Arab country on Sunday.

And he has already visited the newly built stadium in Diriyah which is now ready. It would host the bout that could decide the Brit’s fate.

The Diriyah Arena is in the heart of the UNESCO World Heritage site, known as home of heroes and kings.

It’s the first-ever heavyweight world title fight in the Middle East. They have pulled out all the stops to ensure a night to remember.

Eddie Hearn said: “The arena and site are utterly breath-taking, with a theme park and concert the night before.

The Clash On The Dunes will be a night to remember. We can’t wait.”

Fans attending will take part in an entertainment hub nearby that includes ice-skating, sky diving and jetski-ing.

There’s only one thing on Joshua’s itinerary and that’s claiming back his world title belts.

And when asked if another defeat will spell the end of his career, the Watford-born star said: “No. No way.

Unless Eddie [Hearn] bins me off and every promoter doesn’t want me, cool then so be it. “But providing there’s still an opportunity, I will reign again.” (TheSun)