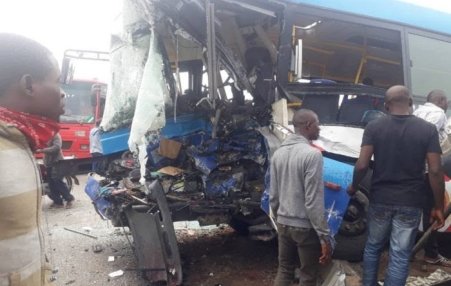 The accident occurred on August 27 at Majidun-Awori, Ikorodu.

At the earlier proceedings, a businesswoman Mrs Odunuga, informed the court that she boarded the bus at Ikorodu garage and was heading to Tafawa Balewa Court (TBS) to keep an appointment with her business partners.

She alleged before Justice Sherifat Solebo that she was standing inside the bus having arrived late to the garage to join the sitting queue.

Led in evidence by Yhaqub Oshoala the prosecutor, the witness said she was busy discussing with one of her business partners on the phone when the accident happened.

Odunuga said all of a sudden, she heard a loud bang.

” I could remember that people were shouting and crying. Everything including seats and people were scattered.

“I found myself lying in the middle of the bus, dead and wounded people were on top of me.

“The people on the bus were matching on me as they struggle to get out of the bus.

The people that came to rescue us were removing dead and persons that were injured on top of me. I was the last person to be rescued and brought out of the bus and laid on the road outside.

” I found that an iron rod had entered my bum-bum and came out through my lap (thigh).

“When I was brought out, I saw other people laid on the ground, most of them were dead. I could not talk, I was just looking”.

Odunuga said the injured passengers were all taken to General Hospital, Ikorodu for treatment.

She further alleged that she found it difficult to breathe properly because she was experiencing intense pain in her chest.

“I remembered sitting beside a boy identified to be the motor boy named Okiki.

Odunuga said that all surviving victims of the accident were treated at the General Hospital, Ikorodu.

“My thigh was swollen and that doctors drained the blood, gave me antibiotics and bandaged the wound.

She said a week after the accident, they were discharged without having recovered fully.

She told the court that she is yet to recover from the injury sustained in the accident.

Under cross-examination by defence counsel, T. Hassan,  Odunuga said herself and others were kept in the same ward.

“We discovered that the boy who was with us was the motor boy when they went for x-ray and the police accosted him.

Odunuga said while in the ward, they tried cheering themselves up but that Okiki kept to himself and spoke to nobody before he was later taken away by the police.

Omotola the second witness in her evidence said she sat towards the back of the bus and was busy on her phone when suddenly she heard other passengers shouting.

She said she passed out following the head-on collision the truck had with the bus.

Omotola said when she opened her eyes, she was under the seat and had to be pulled out by the rescue team.

Under cross-examination by Hassan, Omotola identified the defendant, Sheriff Adebayo as the driver of the truck.

Earlier, Edoh Jeremiah resident at First Avenue, Kosofe also identified the late driver of the BRT bus, Samuel Apochi who he described as her brother from the village.

Justice Solebo thereafter adjourned the matter until January 27, 2020, for the continuation of trial.

The truck driver, Adebayo, 25,  was arraigned on a four count charge of involuntary manslaughter contrary to Sections 224 of the Criminal Laws of Lagos State, 2015.

The State prosecutor, Yhaqub Osoala, told the court that the offence was committed on August 27, 2019, at about 09.30 hours around Majidun, along Ikorodu road, Lagos.

The Director of Publication Prosecution (DPP) said that Adebayo unlawfully killed four people while dangerously and recklessly driving his truck with Reg No. KNC178XA into a BRT Bus with Reg No. LSR 228XS.