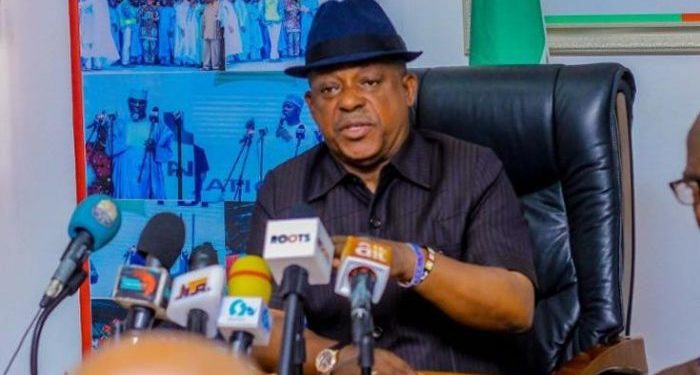 Prince Uche Secondus, National Chairman of the Peoples Democratic Party (PDP), has called on security agencies, particularly the military, to allow the people of Bayelsa and Kogi states to vote their choice in tomorrow’s governorship election.

Secondus, while condemning the needless killing of a voter in Nembe, Bayelsa State on Wednesday, urged security operatives not to allow themselves into areas that would lower their professional value in the eyes of well-meaning election observers and watchers.

In a statement on Thursday by his media adviser, Ike Abonyi, the party chairman said the disqualification of the All Progressives Congress (APC) candidate in Bayelsa State should send a message to everyone that God did not want continued bloodletting of innocent citizens.

“Nigerians expect all stakeholders in the Bayelsa election to see divine hand in the disqualification of blood thirsty APC from the race and respect it. That is a consequence of impunity and it should send a signal to all,” he said.

Secondus added that the APC knew they were never wanted in Bayelsa State in the first place, but that they continued with the help of security operatives to heat up the state to frighten voters away from the ballot box.

“Even before the voting, God has shown his mighty hands and cleared the violent prone APC out of the race,” Secondus said.

The party chair drew the attention of the security agencies to what he described as deployment by Governor Yahaya Bello of Kogi State of devious means, including violence, to thwart the will of voters in Kogi State on Saturday.

According to him, it will be disgraceful if the nation’s military allow a civilian governor to sew military uniform and deploy it on election day for the purpose of intimidating voters and swaying election results.

Secondus urged PDP members and supporters in the two states to refuse to be intimidated by coming out in their numbers to vote and defend their votes.

FG Adamant, Says No Going Back On War Against Social Media

My Video Saves a Lady from Committing Suicide-Godswill(Laughpillscomedy)