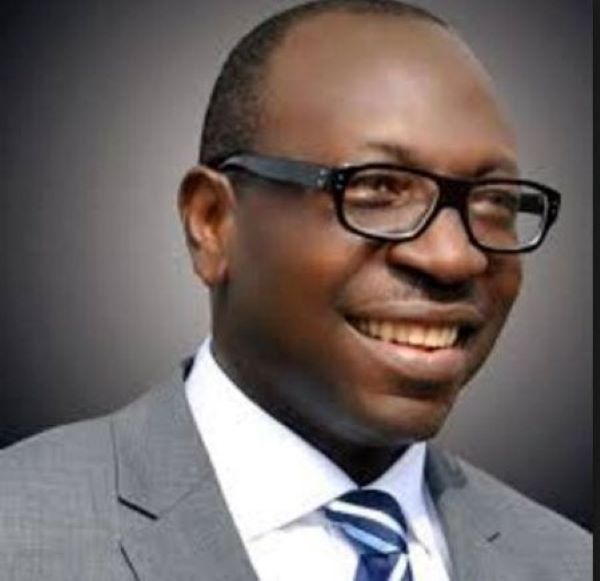 Philip Shaibu, Edo State Deputy Governor on Friday dismissed the chances of Pastor Osagie Ize-Iyamu as a possible candidate of the All Progressives Congress (APC) in this year’s governorship candidate, saying the former Secretary to the State Government (SSG) is not qualified to fly the party’s flag.

According to Shaibu, there is no record anywhere in the state that Ize-Iyamu is a party member and wondered how he could then represent the APC.

But Ize-Iyamu, in a swift reaction, said he is not only a bonafide member of the APC, he was “one of those who did not only form the APC but drafted the constitution of the party.”

Speaking to reporters in Benin, Shaibu said: “The constitution says for one to be a member of the APC in the state, he or she must be registered member of the party in his or her ward.

“Ize-Iyamu is not a member of the Edo APC because he is not registered in his ward. The constitution is clear on who a member is. He agreed to the fact that he didn’t register at the ward and his ward chairman didn’t register him.”

He blamed the national chairman of the APC, Comrade Adams Oshiomhole, for instigating the Ize-Iyamu candidature, and said the action of the former Edo State governor was all about destroying the party and its anti-corruption legacy.

“Oshiomhole is not joining the President’s anti-corruption crusade but rather bringing a person that has an N700 million case pending in court to contest an election,” he said.

He asked President Muhammadu Buhari to intervene in the crisis.

“My message to His Excellency, President Muhammadu Buhari, who is the leader of the party in Nigeria, is for him to intervene in the crisis rocking Edo APC. I urge him to provide leadership at this critical time as Oshiomhole wants to destroy his anti-corruption legacy.

“The Party’s National Executive Committee (NEC) said every state executive should decide on their mode of primary and submit to NWC. We have done that and stand by that resolution. Oshiomhole is an interested party and can’t decide for us.”

The camp of Pastor Osagie Ize-Iyamu was swift in rejecting claims that he is not an APC member.

The Director of Communication and Media of his campaign organisation, John Mayaki, in an online statement yesterday described such claims as laughable, especially the Thursday press conference by APC chairmen in the 18 local government areas of the state on the issue.

He said: “Pastor Ize-Iyamu is one of those who did not only form the APC but drafted the constitution of the party. It is quite unfortunate that many of these people (Obaseki’s supporters) do not read. They have not sat down to even read the APC’s constitution.

“The APC, apart from being a progressive party, was deliberately formed to be a mass organization, and one of the things those who drafted the APC constitution (including Pastor Ize-Iyamu) did was to make it easy for Nigerians, irrespective of who they are, to be able to join the party.

“Politics is a game of numbers. Ideally, you will want to welcome people to your party.

“If you look at the constitution of the APC, in Article 9, you will find that, unknown to them (Obaseki’s allies), you can go to your ward and register or you can even do online registration. The essence of this is to ensure that nobody is deprived.

“When Pastor Ize-Iyamu and other leaders were putting the APC together, Obaseki was nowhere to be found. So, how do you expect a man who should be a beneficiary of a house that he helped to build to be stopped from gaining access into the house?”

The Ize-Iyamu camp said he went to his ward chairman, Mr. Ogbebor, in Ugboko ward in Orhiomwon to say he and his teeming followers were coming back home (APC), and he was given the party’s card.

The former SSG also stated that the indirect primary mode of governorship primary election being advocated by Governor Godwin Obaseki and his supporters would fuel COVID-19 in Edo.

His words: “The indirect option also means Edo governor will mobilise members from every ward to Benin City, which is more dangerous and it appears they do not know the implications of an indirect primary.

“The party has the right to decide on what type of primary election we should have. It will be strange for a participant and an aspirant to dictate the rules.

“The reality is that it is the NWC of APC that has the constitutional power and authority to organise primaries, which can either be direct or indirect.

“But they are misleading the members of the public. APC members in Edo State are not up to 500,000 and this primary election is only for APC members.

“In fact, even the general election in Edo State, nobody has won the governorship election with 400,000 votes. So, when you suggest you can get over 500,000 people, you are just being mischievous.”