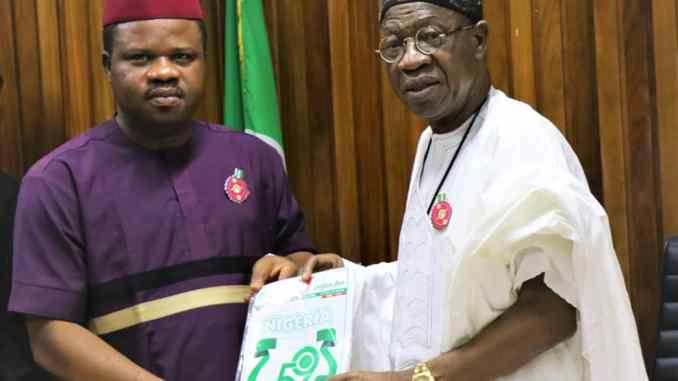 The Federal Government and the Nigerian Union of Journalists yesterday clashed over the plan to regulate social media.

While the former insisted on the proposal, the latter warned against it. The NUJ said it would not support the bill if eventually passed.

NUJ President Chris Isiguzo, the led other executive members on a visit to the Minister of Information and Culture, Lai Mohammed.

He said the union regretted the escalation in fake news and hate speeches and would support any meaningful engagement to curtail the “evils”.

”But we would not “support this bill which, if ultimately passed, could be used to silence the media and perceived political opponents.”

Isiguzo warned the government against destroying the gains the nation had recorded in the quest for genuine progress and development.

He said recent events had given the union serious cause for concern about the journalism profession and safety of journalists.

“The safety of journalists is deteriorating. Safety implies freedom from danger and in the newsgathering context safety implies protection from a range of threats journalists encounter, including arrest, imprisonment, kidnapping, intimidation, murder, among others,” he said.

Reacting, Lai Mohammed said the NUJ put the cart before the horse by publicly rejecting the planned social media regulation without trying to understand what it entails.

He said it was imperative for the NUJ and other professional bodies to guard their turfs jealously and ward off charlatans and those engaging in fake news and hate speech.

Mohammed said: “Let me be clear: We’re going ahead with our plan to stop, as much as we can, the anarchists, non-patriots and purveyors of fake news and hate speeches.

“When we announced the plan to regulate the social media, we said clearly stated that the regulation is not an attempt to gag the media or muzzle free speech.

”We said journalists have nothing to fear. If the NUJ or the Guild of Editors, or indeed any professional body has any fears, we expect them to reach out and engage us, rather than rushing to the media to condemn a plan to inject sanity into the social media space and protect the integrity of the media.”

Hate Speech Bill Is Not About 3rd Term Ambition – Senate

403 New Cases Of Coronavirus Have Been Recorded In Nigeria