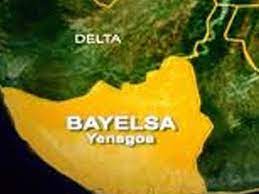 Temedi Agbede Yerimene, a 16-year-old kid drowned in the flood that has engulfed the busy hamlet of Igbogene in Yenagoa Local Government Area of Bayelsa State on Monday evening, sending the area into mourning.
Yerimene was reportedly carried away while swimming at the state ecumenical center’s entrance.

Temedi’s  body may have been dragged into the deep canal next to the Bayelsa Gateway road, which is located along the East-West road.

Temedi claimed that the search party’s attempts to find his body were unsuccessful because residents were finding it difficult to leave the area as a result of the rising water level.
The deceased’s mother, Mama Carol, who went by that name, acknowledged the awful event.
I went to the market to acquire supplies for lunch, she remarked. He had gone swimming with pals, I learned when I got home from the store. However, I believed he was swimming in the compound’s growing water level.

Up until one of his buddies informed me that he had been pulled into the canal by the water.
In order to save students and pupils from drowning, the state authorities already closed all state schools last week.
As of Tuesday morning, the incident had not yet been reported to the police, according to SP Asinim Butswat, the police spokesman for Bayelsa State. However, he promised to inquire with the Divisional Police Officer in charge of the scene.