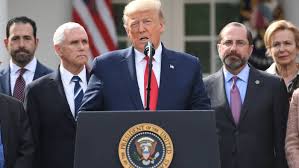 Donald Trump said on Saturday that he has gone to quarantine himself at the White House but yet waiting for the results.

Appearing at a White House news conference where he attempted again to provide guidance and assurance to worried Americans, Trump said he had yet to receive the results of his own test.

Contrary to medical advice, the president was seen Friday shaking hands all around as he gathered his coronavirus response team at the White House — a practice he said Saturday owed to long-time habit as a politician but which he said would have to change.

Trump said Friday he’d “most likely” get tested for the novel coronavirus, as he was grilled on his recent contacts with several members of a visiting Brazilian presidential delegation who have since tested positive.

But a doctor said he “remains without symptoms” and did not need to be tested.

Donald Trump said that intentionally went to quarantine himself and waiting for the results in a day or two.

The White House announced earlier in the day that “out of an abundance of caution, temperature checks are now being performed on any individuals who are in close contact with the president and vice president.”

Before Saturday’s briefing, a member of the White House medical team took the temperature of all journalists wishing to attend.

One of them was excluded after a high reading.