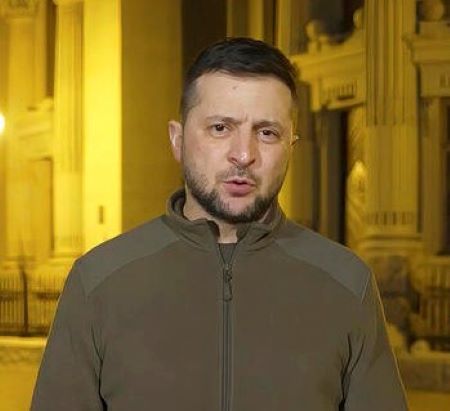 Ukraine’s President Volodymyr Zelenskyy is again appealing to Russian President Vladimir Putin to sit down and talk, in hopes of ending Russia’s brutal and intensifying war against Ukraine.

As Russian forces target the outskirts of the western city of Lviv, Zelenskyy is accusing Russia of creating a humanitarian catastrophe by blocking critical supplies to his country’s largest cities.

The United Nations estimates 6.5 million people have been displaced by the war, coupled with more than 3 million who have fled Ukraine.

“Time to talk,” Zelenskyy said. “It is time to restore territorial integrity and justice for Ukraine. Otherwise, Russia’s losses will be such that it will take you several generations to recover.”

Across Ukraine, the Pentagon estimates more than 7,000 Russian troops have been killed so far.

But Putin is not projecting an image of compromise, vowing at a packed rally that Russia will prevail.

Many attendees told reporters they were under pressure to come out in support of him.

But the heartache tells the truth. In Kyiv, Ukraine’s capital, a son cried over the body of his mother, who was killed by falling debris. And Mariupol — the scene of Russia’s most vicious onslaught — is encircled in siege warfare, leaving hundreds of thousands of civilians trapped without food, water, heat and electricity.

Russia says it’s now “tightening the noose” on the strategic Black Sea city, even deploying Islamist troops from its Chechnya region. A video purportedly released by Chechnya’s pro-Putin leader shows them engaging with Ukrainian fighters positioned on the upper floors of a building.

Meanwhile, in the eastern city of Kharkiv, Ukrainian forces have been holding firm in the face of ferocious Russian shelling. For more than three weeks, Russia has tried and failed, to break through the city.

The battle for Ukraine is extending offshore. Ukraine’s defence minister says Russian troops are blocking access to the Azov Sea, which connects to the Black Sea. It renews concerns that a widening war could be imminent.