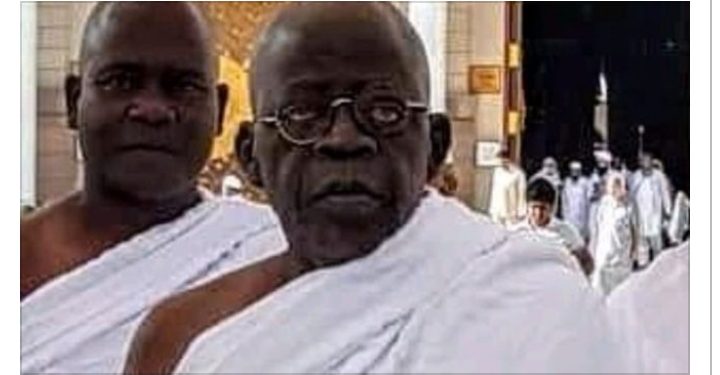 All Progressives Congress (APC), national leader, Asiwaju Bola Tinubu has described the late Lateef Raheem who died on Friday as the extraordinary aide that served him selflessly since 1999.

Tinubu stated this on Saturday while paying tribute to Lateef Raheem his Chief Security Officer who died on Friday at 51. Tinubu said Lateef was a committed, thorough and extraordinary aide.

He recalled how the deceased started to work for him in 1999 “when he was seconded to me by the police during the campaign for the governorship election in Lagos.”

“He stood faithfully beside me during the rigours of the primaries and campaign. He helped me weather the storm,” he said in the tribute entitled “Lateef Raheem- My Extraordinary Aide.”

“I quickly understood that he was an exceptional person and officer whom I wanted to be with throughout the rest of my political journey.  We remained together during my two terms as governor of Lagos.

“We have been together since then. Wherever I was, you could be sure Lateef was nearby making certain of my security and that all was working properly and efficiently.”

Sharing their last moment, Tinubu said: “Lateef reported for work on Monday. Feeling a bit under the weather; he went home to rest.

“We spoke on Wednesday by phone. He was in fine spirits and was looking forward to resuming work. I felt nothing but profound shock, and then the emptiness of deep loss when I was awakened early Friday that my most trusted security aide had died and that I would never see him again.

“I did not know the Wednesday conversation would be our last. The pain of his loss is acute.

“Lateef was a person of strong and resilient character.  He never sought special treatment or favour despite his years of loyal and excellent service to me. He never took his work or his valued position as my aide for granted. He knew I relied on him and trusted him explicitly.

“But Lateef never tried to take selfish advantage of his important position. He was forthright and honest to a fault.

This man was one who completely focused on his job and doing it to the best of his ability. He did everything with care and devotion. “Lateef made sure everything worked well. He was smart, active and always on alert.

He was indeed a rarity as a professional and more so as a person. He never complained or even let it be known that he had these medical conditions. It just was not in his character. He was committed to giving his all to his work,” Tinubu said.

The deceased is survived by wives and children.

Tinubu prayed that Allah might comfort his family and grant his soul eternal rest and admit him into Aljanna Firdaus.

It was gathered that the APC Leader and his aides yesterday underwent COVID-19 test as a precautionary move following Kareem’s death although medical reports did not say he died of the disease.