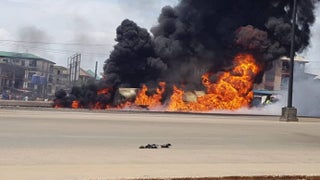 Two persons and 17 vehicles, including 11 trucks, were burnt when a truck bearing petroleum product burst into flame when it tumbled to the ground.

The accident which occurred on Thursday evening at the Ota corridor of the Lagos – Abeokuta expressway, also left six persons with grave injuries.

Among the trucks burnt were one on the fleet of Dangote Cement company and another truck loaded with beverages(sachets of Milo).

The Sector Commander, Ogun State sector Command, Federal Roads Safety Corps (FRSC), Mr. Clement Oladele in a release through the Corps’ Route Commander and Public Education Officer, Florence Okpe, attributed the cause of the accident to a mechanically deficient truck carrying fuel which fell and spilled its contents into road.

Oladele added that fire erupted and quickly spread, destroying every properties on its track from the Shoprite Mall in Ota to the old toll gate; reaching up to the FRSC Command office, Ota.

He stated:”The suspected cause of the crash was a mechanically deficient truck conveying PMS (petrol) products that fell and spilled it’s contents. The spilled contents then spread from the ShopRite Mall in Ota up to the FRSC Command Office located at the old Toll Gate, Ota, destroying vehicles and other properties affected by the spilled inflammable contents

“The FRSC Sector Commander Clement Oladele has advised motorists especially tankers transporting flammable products like petroleum products to adhere strictly to the 1957 United Nations Agreement Concerning the International Carriage of Dangerous Goods by Roads (ADR) which Nigeria recently acceded to, which amongst others require trucks conveying dangerous goods, including petroleum products to be installed with tanker’s seal valve, which prevents the liquefied contents from spilling its contents in the event of a road traffic crash.

“While the FRSC has commenced investigation of the crash , the contents of the crashed tanker would not have spilt if the tanker was installed with a seal valve.

“The Sector Commander commiserated with the relations of the victims and they may obtain more information about the crash from the FRSC Command in Ota , Ogun State or visit the General Hospitals in Ota and Ifo, both in Ogun State.”

Maryam Sanda To Die By Hanging For Killing Husband