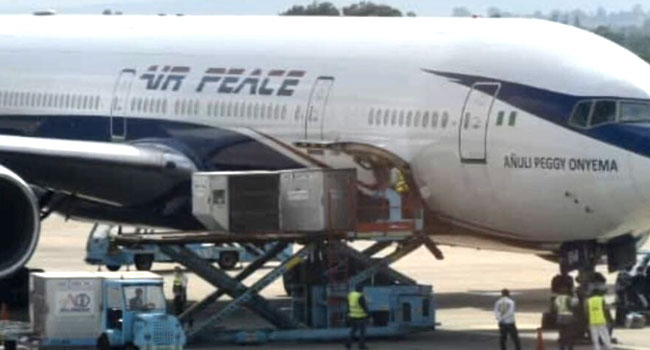 Suspected scores of terrorists have reportedly attacked the Kaduna International Airport, killed one staff and prevented a Lagos-bound flight from taking off.

The bandits numbering about 200 invaded the Airport and shot a staff of the Nigerian Airspace Management Agency (NAMA) dead.

It was gathered that the terrorists first struck on Friday night and were repelled by Nigerian troops after several hours of gun-battle.

The incident caused panic at the airport, as staff  scampered for safety.

The terrorists returned on Saturday morning to the airport and invaded the runway.

The army were said to have engaged them in another gun-battle, but the terrorists were undaunting, insisting the airport must be shut.

Related News
NAMA confirms terrorists attack at Kaduna Airport, identifies killed staff
Terrorists’ food supplier Umar Dauda nabbed in Niger
16 villagers confirmed dead in deadly terrorists attack in Zamfara
A Lagos-bound Azman Airline plane that was supposed to have taken off by 12:30pm on Saturday could not go as the bandits stopped it while taxiing to take off.

A source told The Punch that “The bandits started attacking the Airport around midnight. The soldiers were able to repel them that midnight and we thought that was all. In fact, our workers resumed work this morning as usual till around 12:00 pm.

“Then, shortly after that, some NAMA workers went to check some of their equipment, then these bandits appeared and started shooting.

“The NAMA engineers scampered for safety, they could not even go and enter the vehicle that took them to the site. It was in the process that their security man was shot in the head. The security man was rushed to the hospital and he was confirmed dead.

“As I am talking to you now, the soldiers are still battling those bandits, and they are proving difficult to be repelled. Now, they have shut down the airport.

Lagos To Construct Airport In Lekki