The Ministry of Education announced on Wednesday in Gusau that the Zamfara State Government has reopened 45 of the 75 schools that it had shut down due to insecurity.
Alhaji Kabiru Attahiru, the ministry’s permanent secretary, revealed this to members of the state’s Technical Team on Education in Emergencies (EiE) who visited the ministry to advocate for their cause.
After students from Administration Day Secondary School, Kaya in the state’s Maradun Local Government Area were kidnapped, the state government ordered that all schools close in September 2021. 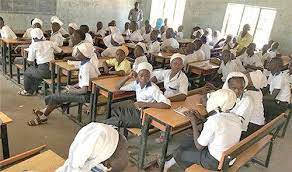 “When the schools were reopened, we divided them into three groups: Green, Yellow, and Red.
Alhaji Kabiru Attahiru stated that “Green were schools located in locations with no security threats, Yellow were schools located in places with a medium threat of insecurity, and Red were schools located in areas with severe security hazards.
All 75 of the schools, according to him, were in the Red group at the time of closure since it was risky to keep them open.
“Today, I’m delighted to let you know that, thanks to the state’s improved security, we were able to reopen 45 of the 75 schools, leaving only 30 of them closed.
“To maintain better security in the state, the government and security services have been collaborating.
In order to reopen the remaining 30 schools, he stated, “we are expecting for more improvement in security in the state.”
The permanent secretary thanked the EiE team for their visit and gave them assurances about the ministry’s dedication to working with all stakeholders to advance the state’s educational system.
“I embrace this new development. I see this group as a partner in development. I am assuring you of the ministry’s complete cooperation and support,” he continued.
You can read more of such stories at The Cheer News
In A Few Days, We Can End The Strike- ASUU
Nigeria&#8217;s FG Moves To Free 30% Of Its prisoners.
Hajiya Sa’adatu Abdu-Gusau, the team leader, had earlier stated that the goal of the trip was to support the creation of the Education in Emergencies Working Group (EiEWG) in the state.
The advocacy tour, according to Abdu-Gusau, the ministry’s Director of Planning, Research, and Statistics, was also a part of celebrations for the International Day of the Girl Child.
You can read more of such stories at The Cheer News and Credible News