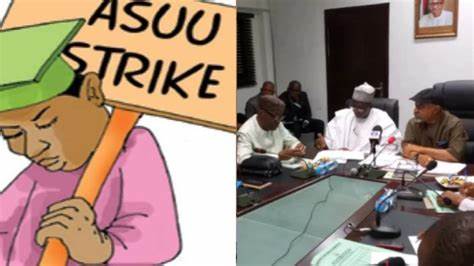 The Academic Staff Union of the University, ASUU has vowed to petition the Nigerian Universities Commission (NUC), and the Independent Corrupt Practices Commission (ICPC) over the conduct of examination by Kaduna State University, KASU, management amidst the ongoing strike by the union.

ASUU which spoke Tuesday via its official Twitter handle @ASUUNGR made its decision known to the public.

According to the tweet: ”This was contained in a statement on Monday in Kaduna by ASUU Kano Zonal Coordinator, Abdulkadir Muhammad.

”KASU, on May 23, said it would disqualify students with less than 75 per cent attendance from writing its second-semester examination.

”The university management had also on April 26, announced the resumption of academic activities on May 9 for the continuation of the Second Semester 2020/2021 academic session amidst the ASUU strike.

”Mr Muhammad said the examinations should be re-conducted after following the due process and suspension of the ongoing strike, otherwise, the Union will be left with no option but to write a petition to the NUC and the ICPC against the Management of KASU.

”The university management had also on April 26, announced the resumption of academic activities on May 9 for the continuation of the Second Semester 2020/2021 academic session amidst the ASUU strike.”

https://twitter.com/caseofcovid19 said: ”I will continue to blame any governor who didn’t call his/her state University lecturers & VC to order for joining the ASUU when the state is not owing them. ”It’s high time government at all levels took the tough decision on this ongoing ASUU strike. ASUU is killing our Education.”

On his part, Oke Ugo Samuel (https://twitter.com/okeugosamuel2) said: ”This issue of ASUU has gone spiritual because a lot of students have spent more than 6 years at home for a course of 4yrs I know you people fighting for a good course but I think the right thing is to give room for Academics activities to be going on while these negotiations continue.

Andyson Garba reply to ASUU @ASUUNGR is: “ASUU, you guys are confusing the public. You guys said that state universities will not benefit from your demands and now you want to sanction KASU. Stop confusing the public please.. be clear with your terms.”

“https://twitter.com/ShalMela”>ShalMela asked the trio: ”What do you expect the students to be doing?

A Digital Marketer said: ”If you’re a student, just get a side hustle instead of waiting for ASUU to call off the strike. I can guide anyone that’s interested in learning Amazon KDP.