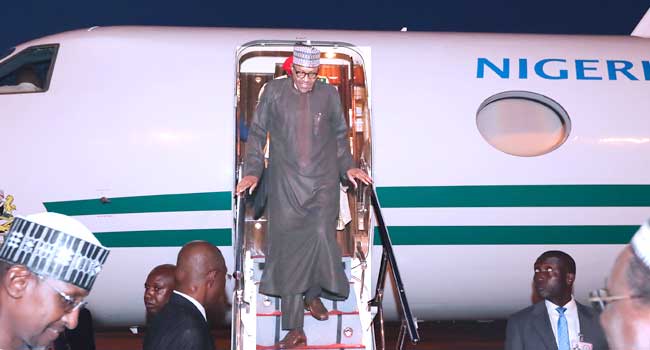 The president of Nigeria, Muhammadu Buhari, arrived in Washington, DC, on Sunday to take part in the United States-Africa Leaders Summit.
At at 6.25 p.m. local time, according to reports, President Buhari arrived at Joint Base Andrews, Air Force Base, Maryland.
The Nigerian ambassador to the United States, Dr. Mrs. Uzoma Emenike, the Permanent Representative of Nigeria to the UN, Tijjani Muhammad-Bande, and the Minister of Foreign Affairs, Geoffrey Onyeama, all greeted the president.
The Nigerian consul general in New York, Amb. Lot Egopija, as well as his counterpart in Atlanta, Amb. Amina Smaila, were among the other Nigerian diplomats present to greet the president.
Along with various ministers and other senior government officials, Buhari was accompanied by the governors of Bauchi and Kwara, respectively, Bala Mohammed and AbdulRahman AbdulRazaq.
At the invitation of US Vice President Joe Biden, President Buhari will attend the High-Level Meeting from Tuesday, December 13 to Thursday, December 15 together with other African leaders.
According to a statement from the presidential spokesman, Garba Shehu, “African governments, civil society, diaspora groups across the United States, and the commercial sector to continue developing our common vision for the future of U.S.-Africa relations.”
Shehu stated that Buhari would speak on the first day about “Conservation, Climate Adaptation and a Just Energy Transition,” focusing particularly on that last part.
READ ALSO: Tinubu: I Will Rule In Accordance To Our Country’s Constitution
Shehu added that the Nigerian president would speak on some of the summit’s other subthemes and take part in the US-Africa Business Forum (USABF).
The U.S. Department of Commerce, which promotes more trade and investment between the United States and African countries, will host the meeting.
The Nigerian delegation will be hosted by the Corporate Council of Africa at a U.S.-Nigeria Business and Investment Forum Business Roundtable on the sidelines of the summit.
He claims that agreements between American and Nigerian organizations and corporations will be signed during the meeting.

21 Killed By Gunmen In Bauchi, Kastina