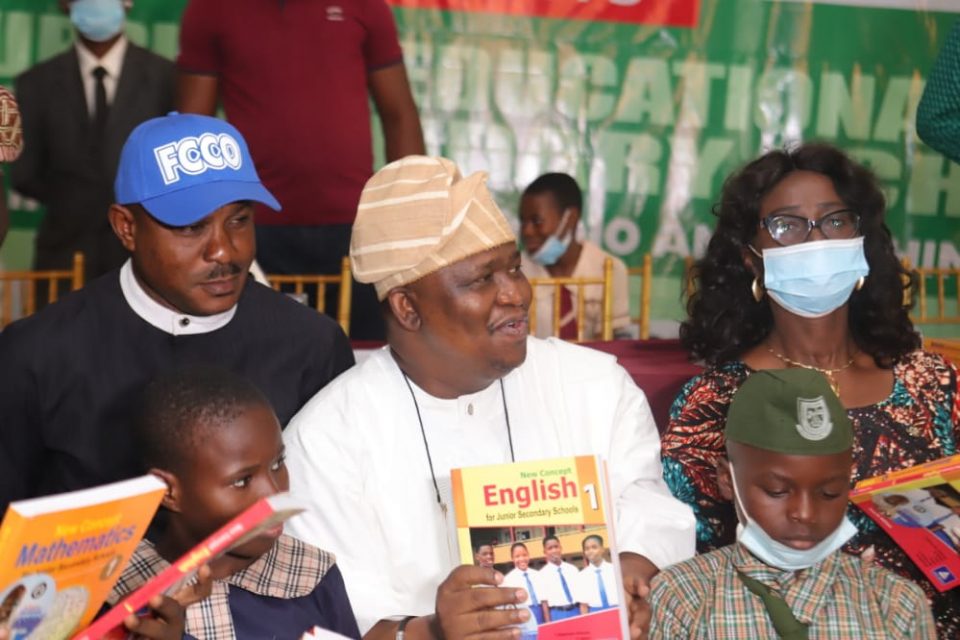 The Senator representing Lagos West Senatorial District, Senator Solomon Olamilekan Adeola has said that education is the only weapon that could be used to tackle insecurity, restiveness, crimes and other social vices that is affecting society negatively.

Senator Adeola stated while presenting educational materials to secondary and primary schools in Lagos West as part of efforts to complement government efforts in the advancement of education in the State.

The event, which had in attendance teachers and students across the Lagos West Senatorial District, was held at the Vantage Point, Acme Road, Ikeja.


He said the action was geared towards providing necessary textbooks for students to come out in flying colour in their examinations.

He said crime and social vices in society today was as a result of a lack of qualitative education, pointing out that the action was to support the efforts of Governor Babajide Sanwo-Olu in his efforts towards the advancement of education sector.

Senator Adeola said he was motivated to give a large number of educational materials to public schools because of his background as a product of such schools.

“I was a member representing Alimosho twice some time ago in the Lagos State House of Assembly when there was a debate on the floor concerning the rewards of the teachers.

“There was a bill in the state assembly concerning upgrading our teachers to the level of permanent secretary. We debated that the reward of the teachers should not be in heaven but on this earth.

“I am one of the few advocates that recommended that teachers must be able to aspire to the level of the permanent secretary,” he said.

“We must be convincing enough so that the Senate will understand the import of our argument and the change we so desire. All these puts together are the efforts of the teachers over us.

“I also thank God for the teachers and my constituency educators for their efforts, If someone had told me that I would be a Senator I would have asked,  how I will achieve that?

“Behold, I am the one representing Lagos West Senatorial District with special recognition to my teachers,” he said.

Senator Adeola appealed to students to judiciously make use of the material in order to expand their knowledge, saying his action was aimed at preparing students for future challenges.

He said that he would facilitate the construction of classrooms, staff room and toilet facilities for ten Secondary Schools in the Lagos West, noting that he has donated a bus to the Nigeria Union of Teachers in the state to ease their movement.

The Tutor General and Permanent Secretary District Six, Mrs Oludara Okelola commended the Senator for the kind gesture, assured that the educational materials would be put to use for the development of the educational sector, saying the textbooks would assist the students in attaining greatness.

She added that it was encouraging so that no matter what as students, the beneficiaries can adequately follow what is being taught in the schools, adding that for whatever reason whose their parents could not afford the textbooks, they have the assurance of having the books free of charge.

“In Lagos State, education has really gone a long way and we are going higher. Gov. Sanwo-Olu is doing much for education, for this year alone we have had many schools project commissioned.

“We have also seen many abandoned school projects revisited. Aside from that, in the last year we have seen the budget for education increased so there is hope for Lagos,” she said.

The Lagos State Chairman, Nigeria Union of Teachers (NUT), Mr Akintoye Hassan, also lauded Adeola for providing for the need of the masses, saying that it is one of the best initiatives I have seen in recent times, what we normally have is tuition-free education and not the free education that we enjoyed in the then Western Region.

“What free education means is a tuition-free school, free textbooks, and other educational materials even sometimes free food to encourage the students, in fact, the gesture today is a landmark for education in Lagos state,” he said.

Two of the beneficiaries of the textbooks and other educational materials, Islamiyat, Adeyemi, from State Comprehensive Junior College, Agege and Olajide Adediran from Agindingbi Senior Grammar School, Agidingbi thanked Adeola for the support.

The educational materials include 15,000 Mathematics textbooks and 15,000 English textbooks.

An Iconic Greek Island Just Got A Majorly Luxurious Upgrade