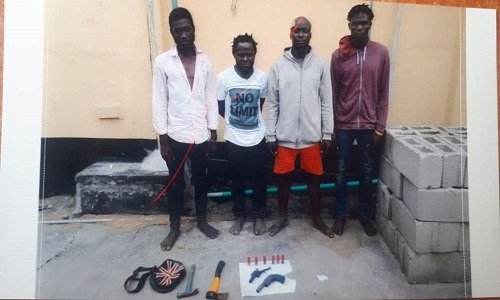 Four alleged notorious armed robbers have been arrested by detectives attached to the State Criminal Investigation and Intelligence Department (SCIID), Yaba and operatives of the Special Anti-Robbery Squad (SARS).

The suspects were said to have terrorised residents of Ojota and Ketu for a long time, robbing them at gunpoint.

It was learnt that detectives, who went to the area to arrest the suspects based on a tip-off, also recovered two locally made pistols with six live cartridges and a battle axe.

“The area was raided for more hoodlums. The suspects have been taken into custody and are giving useful information that will assist in the arrest of other members of the armed robbery syndicate.

“In our usual practice, the suspects will be charged to court at the completion of investigation,” said the Deputy Commissioner of Police (DCP) in charge of SCIID Mrs. Yetunde Longe.