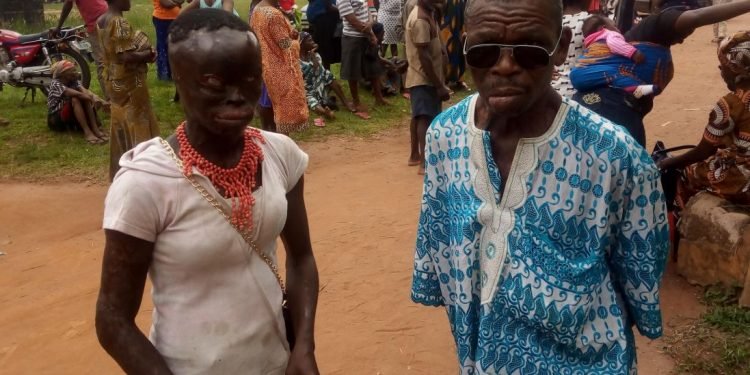 The duo, Egbuleopkro Sabestine and his wife Vivian who were bathed with acid seven years ago and narrowly escaped death are still seeking for justice.

The husband and wife hailed from Umusuode Alike in Obowo Local Government Area of Imo State.

They were both disfigured with acid following the refusal of the woman to fall in love with her husband’s younger brother, Celestine.

Speaking to NAN in an interview, the couple said the assailant attacked them in 2011 in their room where he poured acid on them.

According to the woman their ordeal began in 2011 when the husband’s brother, Celestine professed his love for her which she turned down.

“In the absence of my husband, he wanted me to befriend him but I refused his love advances.”

Vivian who disclosed how the suspect poured the substance on them, said that her hands, face, chest, ears and legs suffered major burns, adding that she also lost her eyesight in the process.

Also, her husband suffered burns from his neck to stomach, she added.

She said that they were admitted at the UNTH, Enugu where they spent seven years through the help of a philanthropist, Eze Goddy Okeke who is now incapacitated by sickness.

“We need help. We have six children, five boys and a girl. We don’t have food and the money to buy food items is difficult because I can’t go about to beg because there is lockdown and no movement,” she pleaded.

She also asked for justice because their attacker who allegedly escaped from Okigwe prison is said to be moving freely at somewhere in Abia State.

“The man escaped justice from the prison and he is moving freely at somewhere in Abia State,” she disclosed.