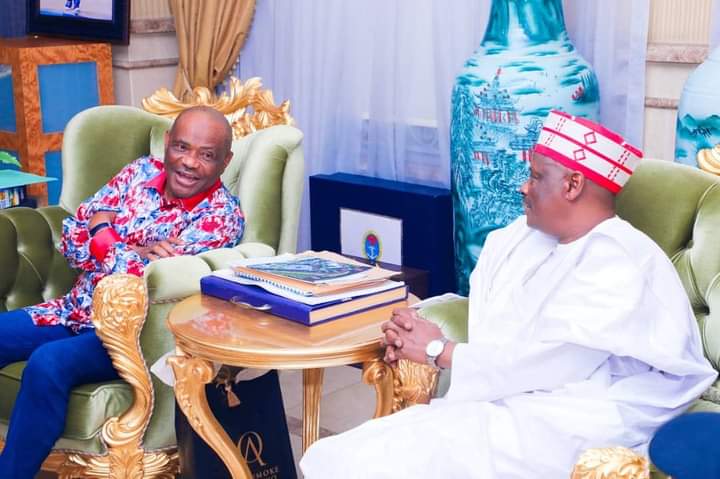 Nyesom Wike, the governor of Rivers State, has endorsed the presidential candidate for the New Nigeria Peoples Party (NNPP(Rabiu)), Kwankwaso.
The change occurs three days after Wike also endorsed Peter Obi’s presidential campaign on behalf of the Labour Party.
In response to the presidential candidates’ requests for projects in the state, the governor of Rivers extended his support.
While Obi began construction on the Nkpolu-Oroworukwu Flyover Bridge in Rivers, Kwankwaso opened the Mgbutanwo Internal Roads in the state’s Emohua Local Government Area.
You can read more of such stories at The Cheer News
2023: Atiku Promises To Restore The Dam And Improve Trade
Nyesom Wike added that he was one of the few individuals to convince Kwankwaso, a former PDP member, to stay in the organisation because he was a benefit to it.
“I recall visiting you at your home in Abuja to beg you not to leave the party (PDP), as I knew you were a valuable member of the party. I resisted even when they ordered me to leave you alone.
I would set up all of your logistics whenever you want to run for office in Rivers State since I have known you and believe you to be a man of integrity. Just let me know when you want to come, he added.
You can read more of such stories at The Cheer News and Credible News

2023: Atiku Promises To Restore The Dam And Improve Trade