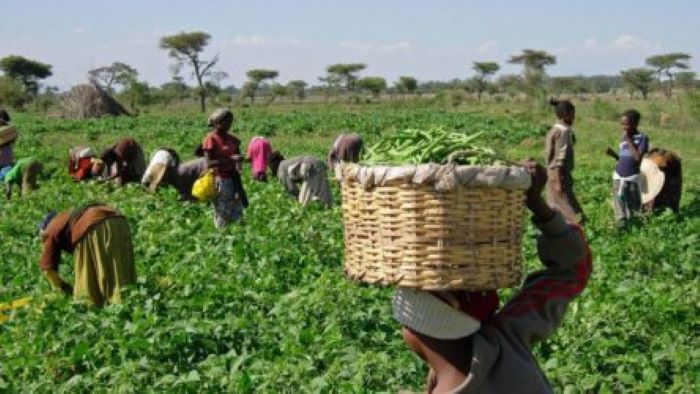 Worried about energy prices? Well, you should start worrying more about the empty bread bin.

Twenty-nine percent of the world’s grain comes from Ukraine and Russia.

Russia, Belarus and Ukraine have banned the export of all grains as a direct consequence of Putin’s War. And, because of our interconnected world, when there is a shortage of one type of grain it has a ripple effect on every other.

Commodity brokers are now predicting shortages and high prices not just for wheat but also for rice, millet, rye, maize, barley, oats and sorghum. This is on top of a 50 percent increase in prices in just six months caused by a 20 percent lower than usual harvest because of climate change issues.

Then there is the impact that less grain will have on livestock production as just about every farm animal needs commercially produced grain. Everything from chicken nuggets to filet steak is going up.

Vegans and vegetarians will be no better off. Add to the above scenario that all grain and vegetable crops are likely to be hit by a lack of fertiliser as 18 percent of the world’s potash comes from Belarus. That means lower yields and higher prices for everything that grows in the ground.

Then finally, there is sunflower oil. Eighty percent of the world’s sunflower oil comes from Ukraine and is widely used in a number of processed foods.

In short, the war in Ukraine is bad news for food prices and the cost of living crisis. The only ones who will see a silver lining might be palm and olive oil growers and a few farmers, but they face higher energy prices for producing and transporting their produce.

People in the developed world will be hit. They will be made uncomfortable. Difficult and painful household decisions are required. But their discomfort is nothing compared to the impact of Putin’s War on the roughly 6.8 billion people who live in the developing world.

According to the Food and Agricultural Organisation (FAO) 24 low and middle income countries imported more than 50 kilogrammes of wheat per person and this wheat provides their populations with an average of 500 calories a day for each individual. The households in these same countries spent 45 percent of their income on food last year.

Ukraine and Russia is almost the sole source of wheat for Turkey, North Africa and the Middle East. In Egypt the government has responded to the crisis by imposing a cap on wheat prices. It is a short-term unsustainable measure. In virtually bankrupt Lebanon they are simply going without and the same is the case in most North African countries.

The developed world can help to ease the problems of 85 percent of the rest of the global population. Developed world governments will face pressure to hoard food supplies. Hungary and Moldova have already banned the export of wheat and corn. Bulgaria is said to be considering doing the same. Hungary’s Viktor Orban—who is in the middle of an election campaign—said: “We must think of our own first.”

The EU has a Common Agricultural Policy (CAP) which takes up a big slice of its budget and is designed to support farmers. It has been gradually reforming itself. In 1980, for instance the CAP was 65 percent of the EU budget. In 2021 it was 35 percent. But the amount spent on agricultural support in 2021 ($185 billion) was still more than the EU’s aid budget ($161 billion). The EU is the world’s largest grain producer—about half of the global total—with ten percent of the world’s grain coming from France. Lower EU subsidies would increase grain produce and lower prices for bread, pasta….

In the US—which produces 16 percent of the world’s grain– crop prices are kept artificially high by something called the Agricultural Adjustment Act (AAA). This 1930s piece of legislation allows the federal government to pay farmers NOT to grow certain crops in order to prevent a surplus which would drive prices down. Scrapping, or at least adjusting the AAA,  would encourage American farmers to grow more which would help to make up for the loss of grain from Eastern Europe.

America also provides a significant amount of food aid to the developing world, but the cost of that aid is kept artificially high by Washington’s insistence that all the food is carried in US-registered ships and that those ships can only carry American-produced wheat and food products.

It is in the interests of the developed world that the developing world is fed and stable. The difficulty that Western world governments will face is persuading their voters.

Fifteen thousand US troops have been either sent from America or re-deployed to NATO’s Eastern blank in Poland, Romania, Hungary and Bulgaria. The total number of American soldiers now based in Europe is 90,000. But before NATO supporters become too excited by this show of martial resolve, it should be noted that at the height of the Cold War in 1960, when the Berlin Wall was built, there were 400,000 American soldiers in Europe spread across 100 sites. One should also remember that NATO has a border with Russia in the Arctic region as well as in Eastern Europe. Until 1999, Norway was the only NATO ally with a land border with Russia. Military planners are working on this strategic fact next week with a military manoeuvre in Norway dubbed “Cold Response”. The military exercise involves 30,000 troops from 27 countries, including 3,000 US marines. These exercises are meant to be held every other year, but because of reluctance from the Trump Administration and Covid, they have not taken place since 2014. This is a pity, because Norway is one of the most strategically placed NATO countries. During World War Two, its long North Atlantic coastline dotted with sheltered fjords, provided Hitler’s navy with a forward base from which to terrorise Allied shipping in the North Atlantic.

In the meantime, Ukrainian Volodomyr Zelensky is pleading for more weapons. The Biden Administration has responded this week by despatching another 2,000 Javelin anti-tank missiles and 2,000 shoulder-launched Javelin launchers, Another 15,000 anti-tank and surface to air missiles are being provided by other European countries, mainly the UK and Sweden. The EU meanwhile has upped its spending on military equipment for Ukraine to $1 billion. Ukraine will need every penny of it. The British and American arms manufacturers are not giving away their equipment. They are selling it, and just one Javelin missile costs $175,000 whether it hits or misses its Russian target.

One of the key indicators of how worried Vladimir Putin is about domestic opposition is his treatment of Alexei Navalny—Putin’s most vocal, visible and best known political opponent. Until this week, Navalny was residing in a relatively comfortable penal colony just east of Moscow. He had been sent there to serve a two and a half year sentence because he broke the conditions of his parole when he flew to Germany for emergency medical treatment after a Kremlin attempt to poison him (spot the irony).  Now, a Moscow court has found him guilty of fraud and contempt of court and sentenced him to another nine years in a maximum security gulag somewhere in the depths of Siberia. This a sure sign that Putin is worried that public opinion may turn against him. He should be. Even though the Kremlin has disbanded Navalny’s organisation, arrested and gaoled Navalny and other key figures, he cannot incarcerate the tens of thousands who supported Navalny. They are prominent among those who can be seen bravely demonstrating against the war. The treatment of their leader is a clear message from Putin: Oppose me at your peril.

In the meantime, the war continues. It would appear that at the moment there is a stalemate with some gains by the Ukrainians in beleaguered Kyiv’s beleaguered suburban towns and some by the Russians in the south and east. The Ukrainian flag has been re-hoisted over a few towns outside Kyiv which were briefly occupied by Russian tanks. But in the southeastern city of Mariupol the civilian population is trapped in bombed-out ruins without food, water or medical supplies. Russian forces appear to be making slow progress towards the even more strategic port of Odessa and crawling forward north and west from Crimea. Putin’s spokesperson, Dmitry Peskov, has refused to rule out the use of nuclear weapons while Biden has warned Russia that using chemical weapons will have “severe consequences.” Despite the apparent Russian stall, the signs are that Putin will double down. There are indications that he is moving troops from the Pacific region. Mercenaries are being recruited from Syria and Belarussian dictator Alexander Lukashenko may commit soldiers from his 60,000-strong armed forces. As a guide to what Ukraine might expect, observers are looking at the first and second Chechen wars.  When the Soviet Union fell apart in 1991 the Muslim enclave of Chechnya in North Caucasus declared itself independent. The result was an invasion by Russian forces and a bloody war which cost an estimated 100,000 lives. But the Chechens won round one. In 1996 a ceasefire was negotiated and the Russians withdrew. But this left a bad taste in the mouths of Russian nationalists, including Vladimir Putin. In 1999 he became prime minister. Almost simultaneously there were a number of alleged Chechen terrorist attacks. Putin used the attacks as an excuse to launch a second – even more brutal—Chechen war. The capital of Grozny was left in ruins after a three month siege; another 100,000 died and the war dragged on for several more years before Russia was able to establish control over the 6,680 square miles that is Chechnya. Ukraine, by the way is 233,100 square miles.

What You May Have Missed at the Alley 33 Fashion Event