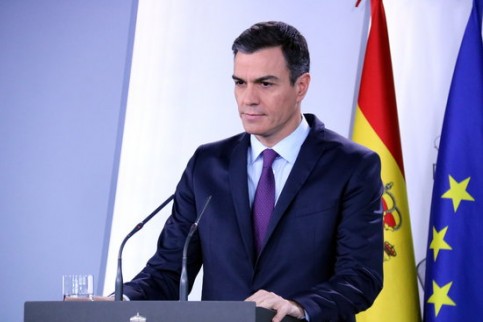 More than 10,003 people who tested positive for coronavirus have now died in Spain, according to the country’s health ministry, marking a rise of 950 deaths from Wednesday’s figures.

To date, it is the highest daily surge in deaths recorded worldwide. The country’s total number of confirmed cases has also increased to 110,238, up from 102,136, officials said.

Spain has the second-highest coronavirus death toll behind Italy, where more than 13,000 people have died from the disease.

More than 6,000 people currently need intensive care treatment while close to 27,000 patients have recovered from COVID-19.

Although Spain’s daily death toll is expected to remain high in the coming days, officials have pointed to the slowing rate of infection, down from 20 per cent last week to eight per cent on Wednesday.

The country is now entering its third week of lockdown. Under Spain’s state of emergency regulations, people are only allowed to leave their homes to buy food, seek medical care for emergencies or if they are workers in vital industries.

Amid the latest rising figures, Spanish social security minister Jose Luis Escriva has warned that the country’s 2020 budget deficit will widen “significantly but temporarily” as a result of the measures taken to halt the spread of coronavirus.

According to government figures, the number of people out of work in March jumped by 302,365, the biggest monthly increase ever recorded in the country.

The 9.3 per cent rise means more than 3.5 million people are now registered as unemployed in Spain.

“This is an absolutely unprecedented situation,” Ms Diaz added.

The data showed 898,822 Spaniards have now lost their jobs since the start of the lockdown.

Many companies, including car plants and other major businesses, have implemented temporary layoff measures over the past weeks.

Why Military Onslaught On Boko Haram

Security Agents Had No Hand In My release, I Paid N50m – Bala Mohammed’s Brother