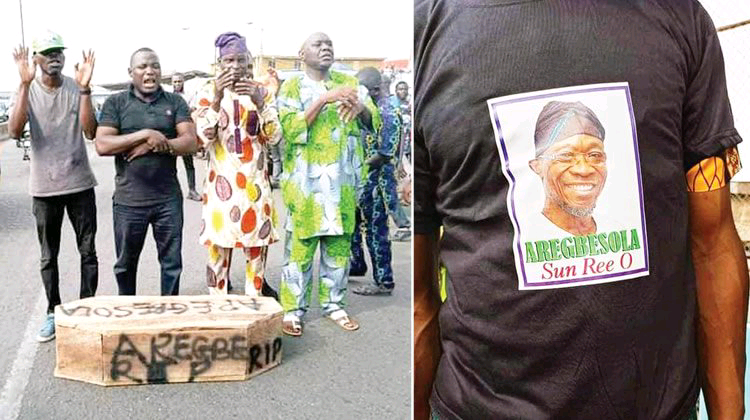 Some members of the All Progressives Congress, on Sunday in Lagos, protested against the Minister of Interior, Mr Rauf Aregbesola, over his reported face-off with a national leader of the party, Asiwaju Bola Tinubu.

The protest took place in the Alimosho area of the state.

The protesters were armed with banners with different inscriptions such as, ‘We reaffirm Alimosho as Tinubu’s country’, ‘We are not ingrates, Asiwaju remains our man’, and ‘Say no to BATCO’.

Some of the protesters also displayed and danced with wooden coffins, depicting the end of the minister’s politics in Lagos.

When contacted, the minister’s aide, Bola Ilori, said he could not comment on the protest as both Aregbesola and Tinubu were his leaders and benefactors.

Aregbesola lists Osun APC primary election defects, considers legal action
Efforts to get Sola Fasure, the Media Adviser to Aregbesola, to react to the protest proved futile as calls to his line rang out, while he has not replied to the text sent to him as of the time of filing this report.