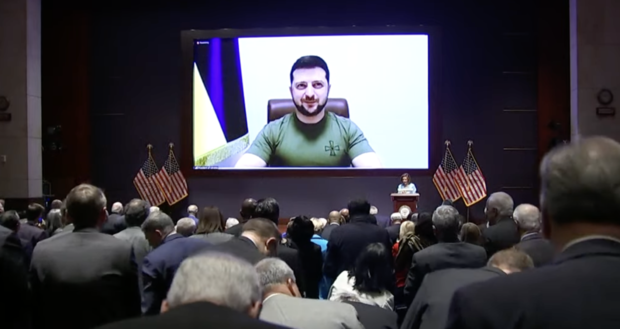 As the war between Ukraine and Russia enters its third week, Ukrainian President Volodymyr Zelenskyy has made a plea directly to members of Congress on Wednesday for the U.S. to help create a no-fly zone over Ukrainian skies.

He also requested that the U.S provides more weapons to bolster Ukraine’s ability to combat Russia’s airpower as Moscow continues its bombardment of the country.

In a virtual address before both chambers of Congress, Zelenskyy invoked key events in U.S. history, including the 1941 attack on Pearl Harbor and September 11, 2001, terror attacks to urge members to provide his country with more assistance to beat back Russia’s aggression.

“Just like nobody else expected it, you could not stop it,” he said. “Our country experienced the same every day, right now at this moment, every night, for three weeks now.”

Russia, he continued, “has turned the Ukrainian sky into a source of death for thousands of people.”

Speaking through a translator for the first portion of his speech, Zelenskyy asked whether it is “too much to ask” for the U.S. to create a no-fly zone over his country and provide air defence systems such as the Russian-made S-300 surface-to-air missile systems. He also called for the U.S. to impose new packages of sanctions, including on all Russian lawmakers, “until the Russian war machine stops” and pushed lawmakers to pressure businesses in their districts that have continued operating in Russia to cease doing so.

“‘l have a dream,’ these words are known to each of you today,” he said. “I have a need, a need to protect our sky. I need your help.”

Zelenskyy ended his address with a graphic video showing the devastation and loss of life in Ukraine by Russian forces and an appeal in English to President Biden and the American people.

“Being the leader of the world means to be the leader of peace. Peace in your country doesn’t depend anymore only on you and your people. It depends on those next to you and those who are strong,” he said. “Strong doesn’t mean big, strong is brave and ready to fight for the life of his citizens and citizens of the world, for human rights, for freedom, for the right to live peacefully and to die when your time comes and not when it is wanted by someone else, by your neighbour.”

Zelenskyy was introduced by House Speaker Nancy Pelosi and received a standing ovation from lawmakers, who wore blue and yellow as a show of support when he appeared on screen before them. His remarks were broadcast to members in an auditorium at the Capitol. Ukraine’s ambassador to the U.S., Oksana Markarova, was also in attendance.

“Slava Ukraini,” Pelosi declared before Zelenskyy began his remarks, or “glory to Ukraine.”

With Russia’s war in Ukraine continuing into its third week, Zelenskyy, wearing a trademark olive drab T-shirt, has appeared before legislative bodies of numerous Western countries, including the British House of Commons and the Canadian Parliament, to urge their nations to help combat Russian airstrikes.

Ukraine’s primary concern going into the next phase of the war is its ability to compete with the Russian Air Force. The top request has been fighter jets, but with the transfer of Polish-owned MiG fighters now off the table, the Ukrainians also want surface-to-air weapons that can hit Russia’s high-flying planes. This would go beyond the shoulder-mounted weapons and Stinger missiles that the Ukrainians have been receiving from the U.S. and western allies.

House Foreign Affairs Committee Chairman Gregory Meeks, a Democrat of New York, emphasized that Ukrainians must be provided with equipment they’re already trained to operate. The Russian-made S-300 systems, in addition to other items, is under consideration, but it would still require locating the available weapons in countries willing to transfer them to Ukraine.

It remains unlikely that pressure on the Biden administration will change the president’s opposition to the transfer of MiG planes, and Mr Biden has voiced his opposition to the creation of a no-fly zone, warning such a step by the U.S. and NATO allies would mark an escalation in the ongoing war.

The White House, meanwhile, announced Tuesday that Mr Biden will travel to Brussels next week to participate in an extraordinary NATO summit at its headquarters. Mr Biden and the alliance’s 30 member countries will “discuss ongoing deterrence and defence efforts in response to Russia’s unprovoked and unjustified attack on Ukraine as well as to reaffirm our ironclad commit to our NATO allies,” White House press secretary Jen Psaki said Tuesday.

Mr Biden will also join a European Council summit, set for March 24 and March 25, “to discuss our shared concerns about Ukraine, including transatlantic efforts to impose economic costs on Russia, provide humanitarian support to those affected by the violence and address other challenges related to the conflict,” Psaki continued.

Margaret Brennan and Kristin Brown contributed to this report.

Russia Has Money To Service Its $150B Debt, But Can’t Access It – IMF