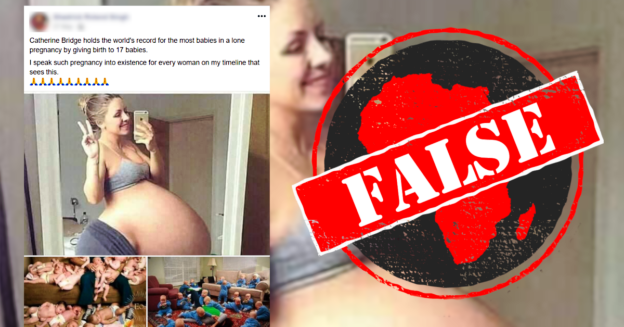 They include a photo of a woman with an unusually large pregnant belly, and another of a man on a couch with 17 babies – if not more.“Catherine Bridge holds the world’s record for the most babies in alone pregnancy by giving birth to 17 babies. I speak such pregnancy into existence for every woman on my timeline that sees this,” reads one caption. 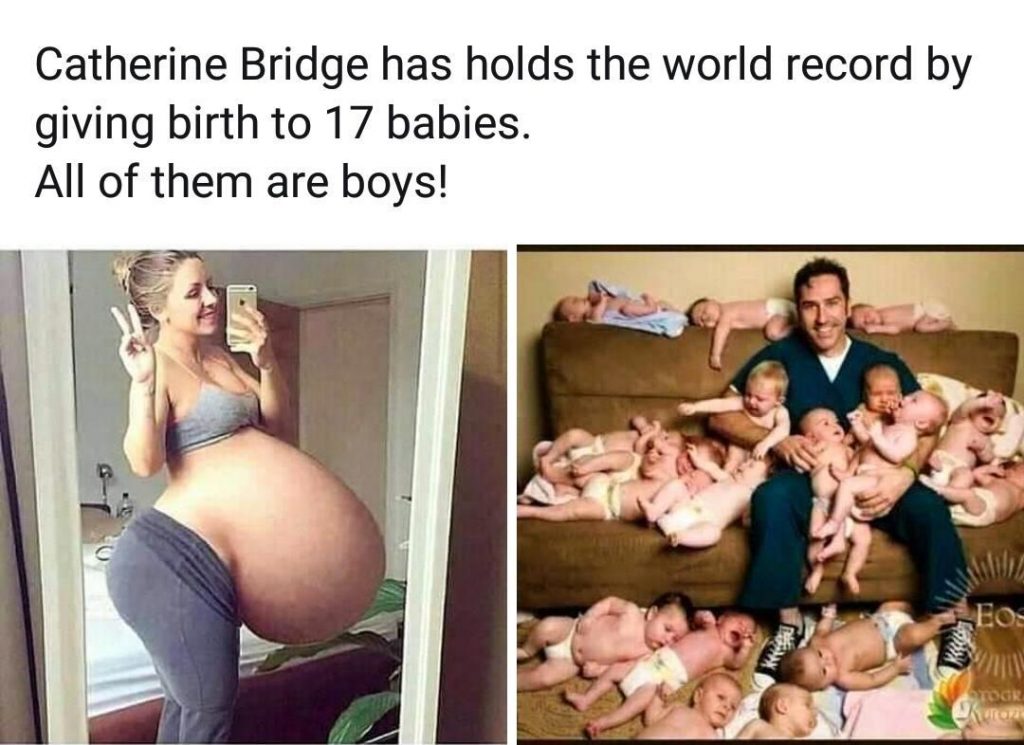 Africa Check asked Stephanie L Gaw, a professor in the University of California San Francisco’s obstetrics department, about the posts.

“The current record for the most babies in a single birth is eight (Octomom, Nadya Suleman), and this was in vitro fertilization with a transfer of way more embryos than is ‘allowed’ per international guidelines,” she told us.

In January 2009 Suleman gave birth to six boys and two girls – a total of eight – at the Kaiser Permanente Medical Center in California, following in vitro fertilisation.

“I think this is definitely not real,” Gaw said.

Guinness World Records lists Suleman as having delivered the highest number of children in a single birth.

The eight babies “were nine weeks premature when they were delivered by Caesarean section”, Guinness says.

The photo of the pregnant woman in the Facebook posts has been photoshopped to greatly enlarge her belly, a reverse image search reveals. In the original, her pregnant stomach is normal.

And a search for the photo of the man with all the babies shows it is of Robert M Biter, an obstetrician and gynaecologist. His website explains that he is CEO of the Babies by the Sea Birthing Center in California.

The story has been checked and rated false by Snopes, AFP Fact Check and Hoax-Slayer.

But where did it come from?

Facebook users are posting it as if it were true, but it was originally a piece of fiction by World News Daily Report, a known satire site.

It tells the tale of a woman from Indianapolis in the US who gave birth to 17 babies in 29 hours of labour and thus “totally annihilated the former World Record for the most babies in alone pregnancy”.

“Catherine Bridges and her husband had been trying to have a child for many years and had decided last year to use medical assistance from a fertility clinic in Rhodes Island.

“The insemination process was definitely successful, as the couple got an entire litter of seventeen beautiful and identical boys,” says the article.

The website is satirical, as it makes clear in its slogan and a disclaimer.

The slogan reads, “Where facts don’t matter”. A disclaimer at the bottom of each page reads: “All characters appearing in the articles in this website – even those based on real people – are entirely fictional and any resemblance between them and any person, living, dead or undead, is purely a miracle.” – Dancan Bwire

Africa Check has partnered with Facebook to combat fake news and false information on the social platform. This fact-check is part of the initiative.

As part of its third-party fact-checking programme, Facebook allows its partners to see public articles, pictures or videos that have been flagged as potentially inaccurate.

Content rated as “false” by fact-checkers will be downgraded in news feeds. This means fewer people will see it.

You can help us identify fake news and false information on Facebook. This guide explains how.

Senate Tells Buhari not to Open Borders for Now

EFCC Arrests Fani-Kayode Over Forgery Despite Defection To APC