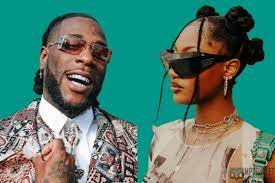 Burna Boy and Tems were among the 65th annual Grammy Awards nominees, who were unveiled on Tuesday.
Tems received a nomination for the song “Wait for U” in the Best Melodic Rap Performance category, joining Future and Drake, while Burna Boy was nominated for the song “Last Last” in the Best Global Music Performance category.
Burna Boy is a veteran of the Awards, having won his first prize for Best Global Music Album with his album “Twice as Tall” in 2021.
You can read more of such stories at The Cheer News
Kizz Daniel To Perform At 2022 World Cup
Tems, whose real name is Temilade Openiyi, was also recognised for contributing to Beyonce’s “Renaissance” album and garnered a nomination.
The awards will be presented in Los Angeles on February 5, 2023.
Rapper Kendrick Lamar is second among all nominees with eight, followed by pop star Beyonce, who has nine, and Brandi Carlile and pop singer Adele, who are tied with seven each.
You can read more of such stories at The Cheer News and Credible News