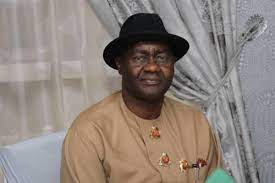 Senator Magnus Abe, a Social Democratic Party (SDP) candidate for governor in Rivers State, has bemoaned the steady rise in political violence in the region.
After his crew was attacked on Monday in the state’s Oyigbo local government area, he raised the alarm.
Senator Magnus Abe claimed that he made the decision to remain silent in the face of all the violence directed at party members during political gatherings and rallies but refrained from speaking to the media so as to prevent Rivers State from making headlines for the wrong reasons.
The issue has reached a point where we can no longer remain silent, Abe remarked during a press conference on Monday night in his campaign office in Port Harcourt.
The nation must be informed of what is happening in Rivers State. Instead of a rally, the SDP in Oyigbo Local Government Area was supposed to hold a stakeholders meeting this morning. I also said I would be there to support our Oyigbo supporters by reassuring them. Additionally, pay a sympathy visit to one of the kings, meet with the Oyigbo chiefs, and then pay a visit to one or two local SDP leaders who are well-known.
“A hall in Ayama was to be used for the conference. As one of my constituent initiatives in the Senate, I built, finished, and donated this hall to the neighbourhood.
Even though the facility had received consent from the chief and community elders, thugs went into the location early this morning when they learned we were going to have a meeting, destroyed everything, and locked it up, according to Abe.
The SDP candidate for governor continued by saying that after receiving the information, he promptly notified the police and requested that they leave since “our premise had been non-confrontation, non-violence.” The gathering was then moved to one of our sponsors’ private property. I then departed from there to go to the conference.
You can read more of such stories at The Cheer News
Kizz Daniel To Perform At 2022 World Cup
Niger Delta Ministry Has No Business In Abuja- Atiku
“When we arrived at Egberu, the border into Oyigbo, the road was blocked by criminals carrying firearms, knives, and other potentially lethal items. They claimed that we could not enter Oyigbo because this is Desmond Akawor’s residence.
The SDP is not possible in Oyigbo local government. And I wondered if we had accidentally entered another nation or if we were still in this region of the Federal Republic of Nigeria. because it was daytime when this was happening.
However, Abe praised Okon Effiong, the new police commissioner for Rivers State Command, for his preliminary work.
The PDP state chairman, Ambassador Desmond Akawo, responded to Abe’s claim by saying that thuggery is not a part of his life.
“Abe should not blame me for his difficulties; he has enough with the APC and his supporters, in my opinion. He is my friend; we recently met at a gathering and exchanged hugs.
Okay, supposing without accepting that he was visiting my home for campaign purposes, is it not polite of him to let me know that he was visiting my village?
You can read more of such stories at The Cheer News and Credible News

Reasons Your Vagina Itch During Your Period

‘Why FG Is Driving Tech Dev’t With Private Sector’